"Do you remember when I kissed you?" They also told my husband about this ", the elderly woman leaves Sali Berisha speechless with her request 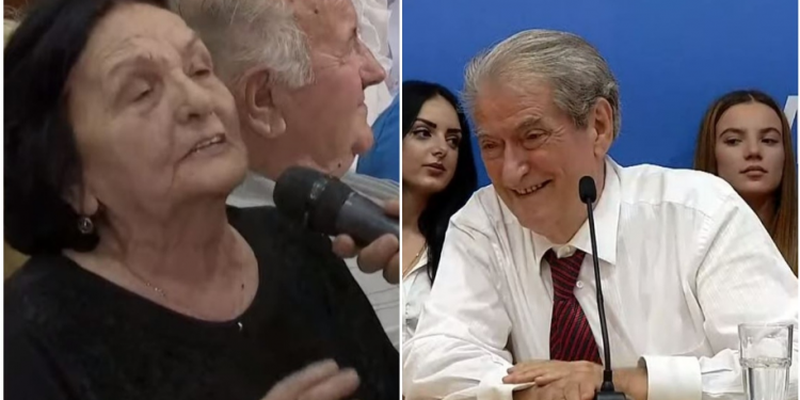 Former Prime Minister Sali Berisha was last night in Vlora, where he met supporters and leaders of the PD branch in this city to persuade them to join his initiative, whose first objective is to overturn the decision of Lulzim Basha who was expelled from the parliamentary group, after the US declared him "non grata".

Berisha's supporters also spoke during the meeting. Among them was an elderly woman, who confessed to the first meeting with the historical leader of the Democratic Party 20 years ago, causing laughter in the hall, but also to Berisha himself.

"We wish you health and long life, I am the democrat of '44. If Rama forgives me half of Vlora, I will not become a socialist, I am a democrat. To know about an honest and not corrupt man. As much as they say on TV that your children are rich, here all the villagers are enriched, with villas and stairwells, with a bag… for this we hear on TV I mean.

I when you first came here, I met you and kissed you, hugged you, they told my husband; "Your wife kissed Sali Berisha." He did well, he said, he is the father who will save Albania. I was very young, I was 20 years ago. I came to say anything to do with our properties? We forgot the properties now, we want health because we are all for Babica.

Will you split this party in two or will you make it one? Then unite and north a party god and take Basha from where he came to water the flowers of Holland. Lulzim Basha to go where he belongs. "If the party does not unite, we will never win," said the elderly woman.

Arjan Curri reveals what would happen to the Democratic Party if he did not exclude Sali Berisha: The Americans keep their word!

Arjan Curri: Even if you take them to prison, they will kill each other

Klodiana Lala reveals strong details: A year ago there was a fight between a businessman who was executed in Fier and an OFL character

"VOA": The increase of cases with Covid in Albania returns, here is what has been noticed in the last week

Crime within the family in Vlora, the relative speaks through tears: I heard screams. He blushed when he spoke with his mouth no more ...

Accident on the road Lezhë-Shkodër, the vehicle goes off the road, it is reported to be injured

"Olives were killed while working" / From physical clash to bullets, the conflict that caused the double murder in Vlora