Artan Hoxha brings out the scary images: This was an incredible operation 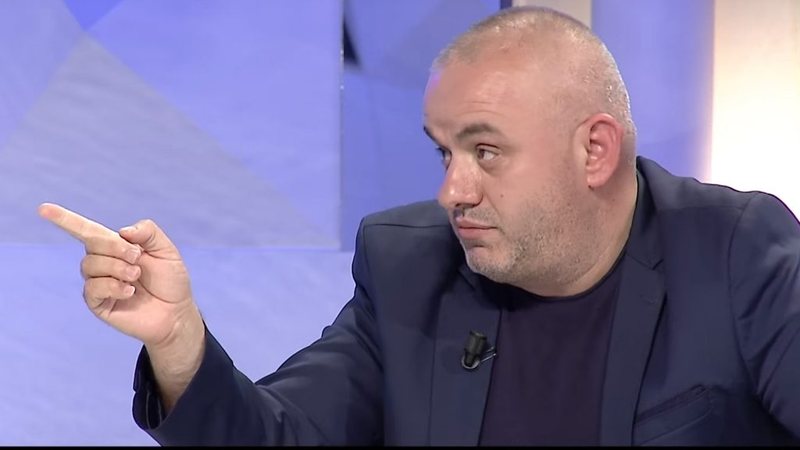 The investigative journalist reacted after a serious accident recorded today along the road segment Çorovodë-Prishë.

In the place called “Blëzenckë Bridge”, the citizen Alban Faik Hasanllari, driving a Benz type vehicle, with license plates AA 172 DH, went off the road and ended up under the bridge.

"Residents and Skrapar police rescue the injured in the Osum Canyon ...

On Sunday morning, around 10:00, a Benz Mercedes vehicle with luggage, driven by a citizen from Saranda, crashed from a height of 80 meters directly into the Osum Canyon.
The event took place at the entrance of the Blezencka bridge, on the Pristina-Çorovode road axis, on the left bank of the Osum River.
The driver of the vehicle lost control of the deck at the entrance of the bridge and slipped from a height of 80 meters directly into the bed of the river Osum, which in this season of the year fortunately has low water inflows.
The Blezencka Bridge, located near the village of the same name, rises in the narrowest part of the Osum Canyon, at a height of 80 meters from the river bed and was built in the early 1970s. Despite the danger that the bridge itself has due to the position where it was built and the road at the exit of the bridge built on a rocky slope in the direction of the village Blezencke, for 50 years it is not remembered that there was an accident.
The position where the vehicle fell, the great depth of the canyon, the fact that the accident occurred in the narrowest part of the canyon, almost in the middle of it, has made it very difficult to provide assistance.
A passer-by happened to be over the bridge taking pictures of the canyon when the incident occurred. He saw the vehicle end up at the bottom of the canyon and a few moments later he spotted a person inside the car who had survived and was asking for help. It was this person who asked for help and informed about the event. A few minutes later, residents of the village of Blezencke came to give first aid. Recognizing the area they descended to the river bed through a very steep rocky path and found the vehicle inside the Osum River stream. Fortunately, the flow of the river was not deep, without endangering the taking of the vehicle and its driver.
A little later at the scene of the accident, the Skrapar police and the fire department of the town of Çorovoda came to the rescue. The driver of the vehicle, despite the severe injuries he had received from falling from the great height of the canyon, had survived wonderfully.
But the depth of the canyon at the place where the accident took place, made it very difficult to get the injured person out and send him to the hospital. In these conditions, the help of the members of the Rafting Federation was requested, to launch a boat from 80 meters high in the river bed.
The wounded man then had to be transported by canoe in the opposite direction of the river to the place where he could be offered ambulance assistance.
It took several hours, with a great sacrifice, in a terrain, where even for the climbers or RENEA divers it would be very difficult, but some young people from the village of Blezencke, the police and the fire brigade of Skrapar enabled an operation of incredible salvation.
But apparently the worries for the survivor of this accident were not over, because the request for emergency assistance by helicopter from Tirana was rejected with the claim that the helicopters had run out of flight hours and that they could not move from Farka air base. In these conditions, even though the wounded man was in a very serious health condition and after being sacrificed from the depths of the canyon, there was no other way but to transport him by ambulance to the hospital of Berat which is located about 65 kilometers away from place of accident.
We wish that the distance from Berat is acceptable for the emergency helicopter in order to at least avoid the traffic from the entrance of Tirana to the trauma hospital.
It seems paradoxical that all the sacrifices of the residents of the area, the local police and the fire service, who risked their lives to bring the injured person out of the depths of the canyon, be rejected by a bureaucratic order from the capital. "The helicopter cannot come to your aid because it has completed its flight hours."
Meanwhile, after traveling 65 kilometers by ambulance, on a mountain road with continuous turns, from Skrapar to Berat, a helicopter is offered to transport the wounded in the field, only for 120 kilometers ... ", writes Artan Hoxha.

Remzi Hoxha's son makes the statement 'bomb': Berisha still has ties with Serbs, he is afraid that ...!

Accuses Sali Berisha for the disappearance of his father, Remzi Hoxha's son tells two events that implicate the former prime minister: The father saw his escort with ...

The disappearance of Remzi Hoxha, his son makes strong accusations against former Prime Minister Sali Berisha, reveals the detail that adds to the suspicions: Here is who kidnapped him

Dizzying figures are revealed, here is how much the treatment from Covid-19 in Albania costs, Nora Malaj: As a family, it cost us ...

Citizenship scandal, well-known journalist warns Meta: Here is what will happen in the coming days

"Treasury employee arrested for illegal transfer of two million euros", here is what VOA writes about the official who shook Kosovo

The decision for the masks / The well-known lawyer provokes the police on the street, they give him the answer he did not expect: Only a ...

Reported as a victim of COVID-19, friends of the 61-year-old make strong reaction, bluff Ministry of Health: Suffered from ...