Gledis Nano waits in a meeting with the Austrian ambassador, it is revealed what they discussed 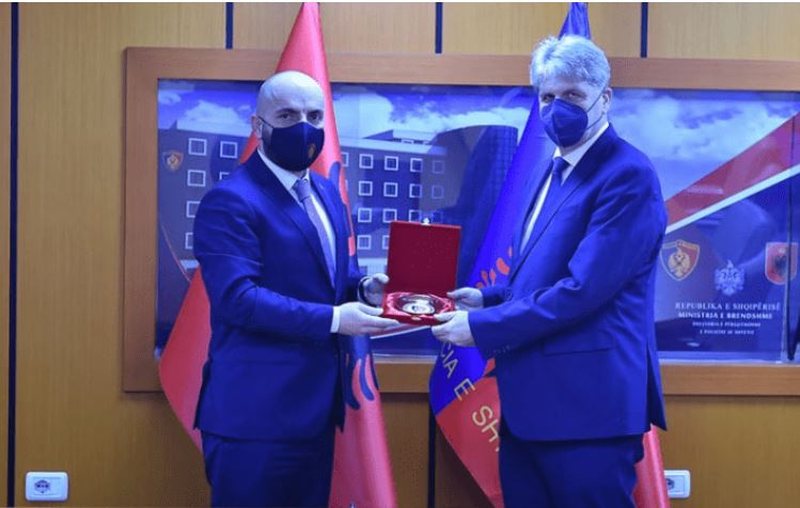 The General Director of the State Police, Gledis Nano, received the Austrian Ambassador to Albania, Christian Steiner, who was accompanied by Wolfgang Samer, the Austrian Liaison Officer in Albania.

The focus of this meeting was the presentation, discussion on issues of common interest and identifying areas where we can cooperate in the future.

The Ambassador of Austria to Albania, Christian Steiner, congratulated the General Director of the State Police for his appointment, and praised the very good cooperation between the two law enforcement bodies, in various fields, mainly on security issues. The Ambassador expressed to Director Nano, the readiness of the Austrian side, to give its assistance and contribution for the establishment / creation of an Alpine Police structure at the State Police.

At the same time, the Ambassador guaranteed Director Nano, for the strengthening of future cooperation, in priority areas, such as the fight against organized crime, drug trafficking, money laundering, financial investigation, and illegal migration.

He acquainted the ambassador with the measures taken by the State Police, through border and criminal structures, to prevent and crack down on illegal border crossings, measures that also consist of cooperation and coordination of actions with counterparts of the Kosovo and Montenegrin Police.

Nano suggested that in the future the Albanian side be considered, in joint investigations with the Austrian side, on issues related to economic and financial crime, money laundering, corruption and the field of narcotics. At the same time, he suggested that a meeting be organized between the heads of the anti-terror structures of the two police forces, in order to increase cooperation in this field.

The Austrian Liaison Officer in Albania, Wolfgang Samer, expressed his readiness to continue the close cooperation with the State Police, exchanging information on any case or issue, being transparent and committed to achieving the common goal, that of fight against crime.