Investigation of several months / Weapons, heroin and millions of ALL, who are the 5 young people who sold hard drugs on the streets of Tirana 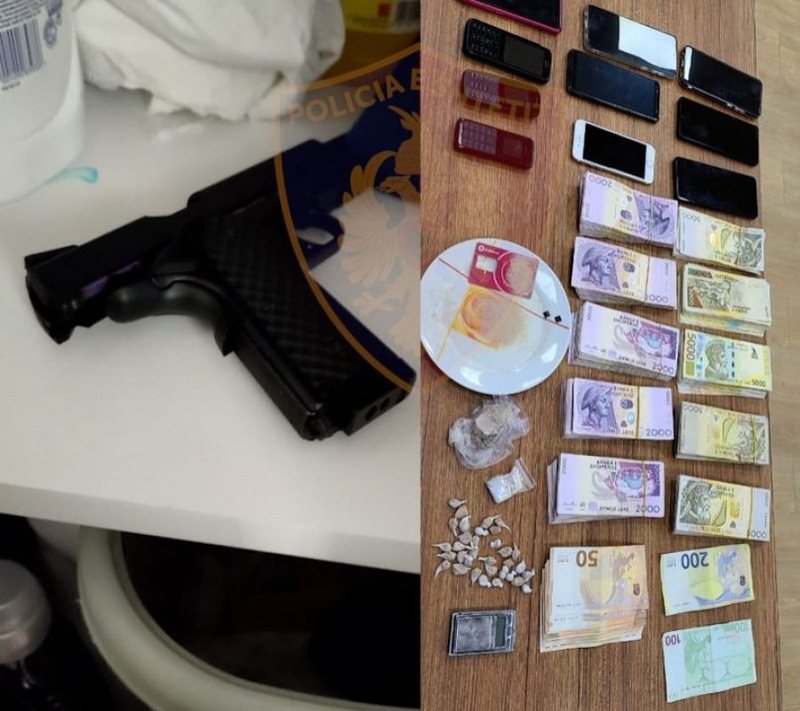 After several months of investigation, a criminal group dealing with the distribution of hard drugs has been hit today. During this operation, a pistol firearm, a quantity of heroin divided into doses, 2,600,000 new lek, 2 thousand euros, electronic scales, 10 mobile phones and a vehicle were seized.

Tirana / The police operation codenamed "Complex" is finalized, to crack down on criminal activity in the field of distribution of hard drugs. Operation by the Police Commissariat no. 6, in cooperation with the Investigation Structures in the Tirana DVP, after a several-month investigation, under the direction of the Tirana Judicial District Prosecutor's Office. 5 persons involved in this criminal activity are handcuffed.

A pistol firearm, a quantity of heroin divided into doses, 2,600,000 new lek, 2 thousand euros, electronic scales, 10 mobile phones and a vehicle were seized. Following the work to prevent, identify and crack down on criminal activity in the field of distribution of hard drugs, based on the evidence gathered, as a result of several months of investigation, under the direction of the Prosecution, by Crime Investigation Specialists at the Commissariat of Police No. 6 Tirana, in cooperation with the specialists of the Investigation Structures in DVP Tirana, the police operation "Kompleks" was finalized, in the framework of which the citizens were handcuffed:

During the operation were found and seized as material evidence a pistol-type firearm, 2,600,000 new lekë and 2000 euros benefited from this criminal activity, a quantity of heroin narcotics, a part divided into doses ready for sale, an electronic scale used to weigh narcotics, 10 mobile phones, a vehicle used by detainees, to distribute narcotics. The operation to identify and apprehend other persons involved continues, as well as the complete documentation of this criminal activity. The procedural materials were forwarded to the Prosecution at the Court of First Instance in Tirana, for further action.