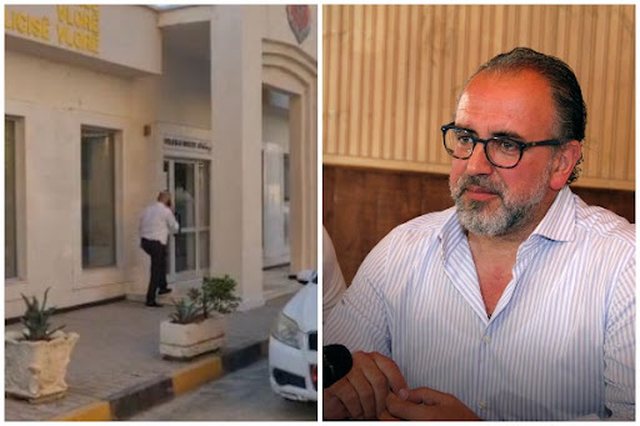 The debate started for the dismissal of Leskaj's office, which on August 6 signed his resignation but then repented, but the mayor of Vlora did not accept it, sticking to the first decision.

Today, in a reaction to the media, the Water Supply and Sewerage Company announces that Shkëlqim Leskaj is in charge.

The statement said: "There has been no 'robbery' by the holder as to the seals and protocol books as claimed, they are in accordance with the legislation at the Company's headquarters."

Vlora Water Supply and Sewerage Company, through this press release, seeks to clarify the public opinion regarding the situations covered by some media and portals for some disagreements arising during a meeting organized in the office of the head of the Company, between the Water Supply Administrator Sewerage Vlora, Mr. Shkëlqim Leskaj and the Mayor of Vlora, Mr. Dritan Leli.

We would like to inform you that there is no interruption of the activity of the Water Supply and Sewerage Company of Vlora, continuing the normal realization of all tasks in the service of our citizens and customers, both family and private.

Director Shkëlqim Leskaj is in charge, exercising his competencies, pursuant to Law no. 9901, dated 14.04.2008 for "Traders and Trade Companies".

The Head of the Company, this Tuesday morning, dated 21.09.2021, held the morning meeting normally, sharing the respective tasks for all Sectors of the Enterprise.

Mr. Shkëlqim Leskaj continues to remain in office, within all the duties attributed to him according to the legislation in force.
Mr. Leskaj continues to be registered with the NRC, as a legitimate entity in the capacity of Administrator of the Company.
There has been no "robbery" by the holder regarding the seals and books of protocols as claimed, they remain according to the legislation at the headquarters of the Company.
During this period by the Water Supply and Sewerage Company Vlora and its administrator, no tender contracts were signed for water meters (meters), chlorination and employee uniforms.
During a year in charge of Vlora Water Supply and Sewerage, Mr. Shkëlqim Leskaj has led with full commitment in terms of service to citizens, being maximally engaged and present everywhere in the field, even outside the official hours, including late at night , to provide effective and timely solutions to all problems in the water supply and sewerage network.

All the accusations raised in recent days against Mr. Leskaj, are speculations, with malicious intent to tarnish the image of the head of this Society and to tarnish all the activity and energies spent by him throughout this task that is continuing with full dedication. 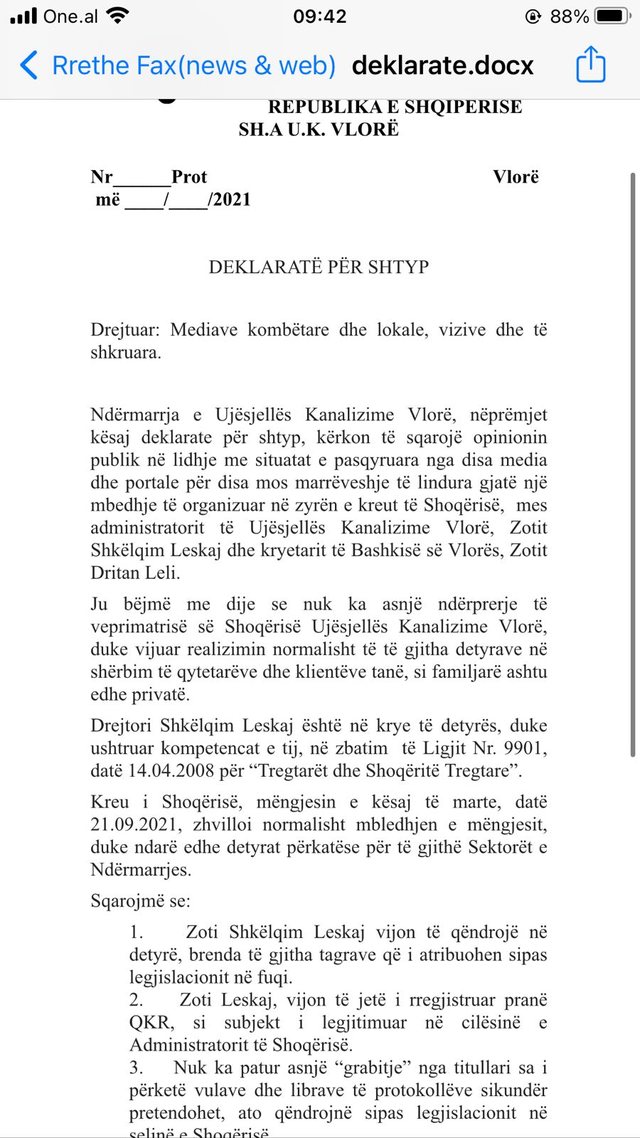 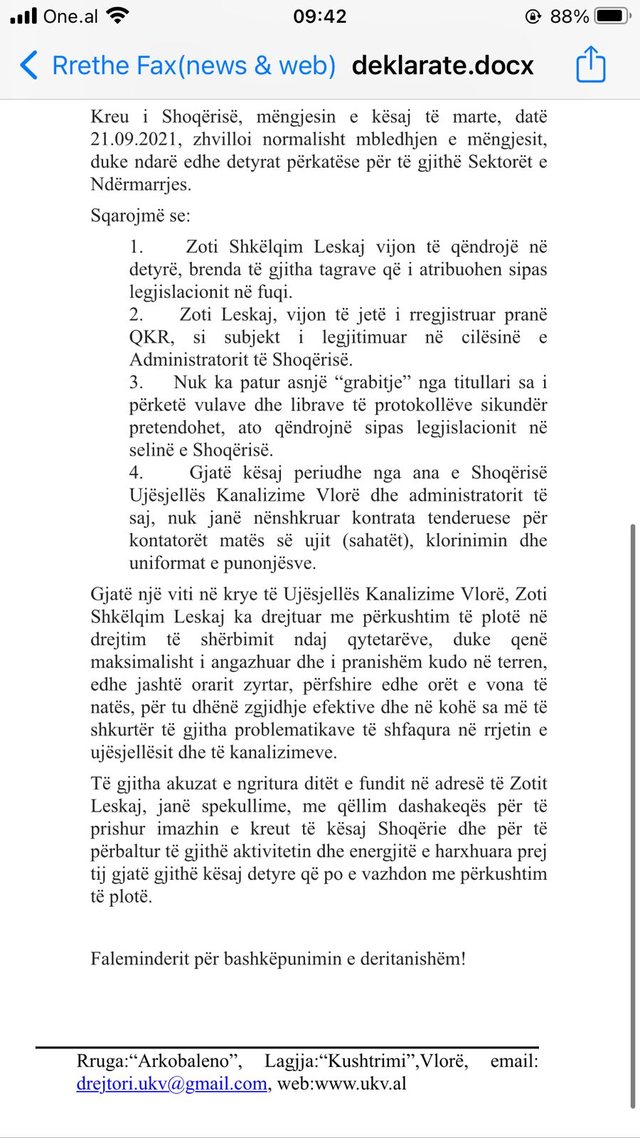 Ylli Manjani: SPAK is full of files, it is not dealing with issues that it intends

Serious accident in Kruja, father and daughter injured, how is their health condition

Recorded the youngest victim of Covid in the country, a girl from Saranda

Manastirliu talks about the epidemiological situation in the country: Infections have increased, we have only one way to fight Covid

The car ends a few meters down the road on the Tepelena-Gjirokastra axis, the police uncover the event: There are injured

Heavy in Vlora! A man lost his life after falling into a well (Name)

Good news! No casualties from Covid-19, it is revealed how many new cases have been recorded within 24 hours

Police action flash in the last hours in our country / 11 people are arrested and 14 others are declared wanted. The accusations are cleared

They were intercepted for corruption, the Court of Tirana takes the decision for the arrested police officers