Mega operation by the Spanish police, 10 Albanians are arrested, 20 plantations with over 44 thousand marijuana plants are destroyed, this is how the operation was carried out 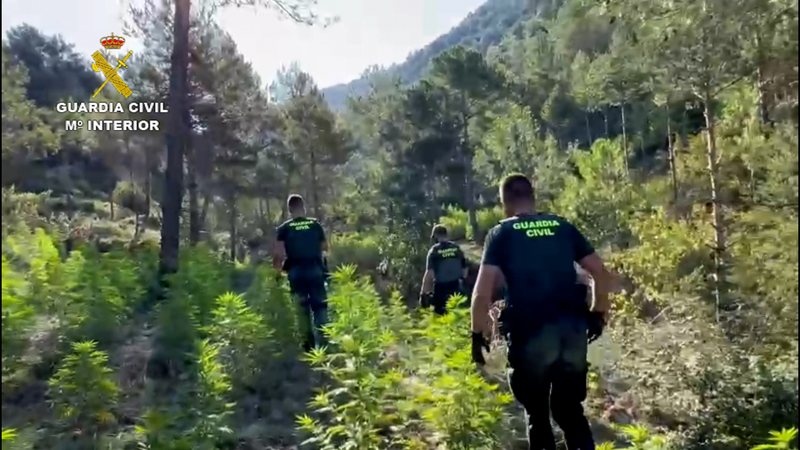 Spanish law enforcement agencies have cracked down on another Albanian drug-growing criminal group in the Iberian territory. As a result of the mega-operation carried out by the Civil Guard during the months of March-November of this year, 10 Albanian citizens were put in handcuffs, while for 2 others criminal proceedings have started for not reporting the crime as they are suspected of having knowledge of the marijuana plantations. In total, 44,382 marijuana plants were destroyed, which were cultivated in 20 plantations set up in deep forest areas. The difficult terrain and the vigilance of the criminal group to possible observations and penetrations by the Spanish police, made the Civil Guard succeed in discovering, locating and arresting them only in the last months.

Details, mega operation in 6 municipalities, some plantations hidden deep in the forests

So far, the total value of the narcotics eliminated has not been determined, but the mega-operation was carried out in the municipalities of Secastilla, Boltaña, Aínsa, Benabarre, Tierrantona and Fanlo of the Sobrarbe and Ribagorza regions (areas where the operation was carried out). In total, 82 police officers were engaged in the fight against drug cultivation and trafficking. The Albanian criminal gang had taken care to establish the plantations in the deep forest areas. They had built extensive and complex marijuana irrigation systems, while alarm systems had been installed to signal the entry of any person into these territories.

In terms of guaranteeing the safety of the plantations, the people involved had also thought of the scenario that if the police intervened, they would escape on a secondary escape route. "At all times the guardians maintained a maximum level of alertness, always having several escape routes, in case they were discovered they would flee the country by leaving the plantation, which made surveillance difficult by the agents, who had to take extreme measures to to discover them", reports the Iberian media.
The guards had to stay on the plantations for 6 months
The guards selected to protect the "drug houses" had to stay a maximum of 6 months in these plantations and were constantly supplied with the necessary nutrients, work materials, etc. "The managers of the plantation would spend up to 6 months living in these camps, being supplied by other people with work materials, food, butane gas and basic items every month", according to the investigative findings.

Realizing the operation, the Civil Guard officers were helped by the dense forests