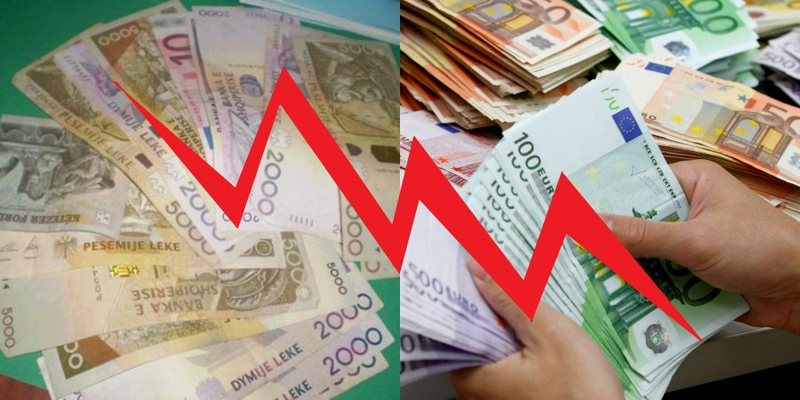 The decline of the common currency in the domestic market has not stopped.

According to the official exchange rate of the Bank of Albania, today one euro was exchanged for 118.93 alleks, dropping below 119 alleks for the first time since the euro entered as a physical currency in Europe, more than 20 years ago.

Compared to the beginning of this year, the euro is being exchanged for almost 2 lek less. The euro rose briefly in early March, reaching up to 130 lek, as a result of the uncertainty caused in supplies by the crisis caused by Russia's attacks on Ukraine.

Then, the course returned to equilibrium. From the beginning of June until now, the euro has continuously lost points in the domestic market. Exchange market actors said that this phenomenon is related to two factors:

-The first factor is related to the seasonal effects of tourism. The latter is returning to normality after the pandemic and INSTAT data showed that for the 5th month, the arrivals of foreigners in the country were 12% higher than in 2019, when it was also the best historical year for tourism so far.

As a result, foreign exchange flows from tourism have increased.

-The second factor is related to informal entries, which have always influenced the increase in the supply of currency in the country.

According to the operators, after the news about the fiscal amnesty, there is an increase in the inflow of informal money flows, being another factor that has influenced the devaluation of the euro.

The government's recent initiatives to legalize cannabis and apply a fiscal amnesty, even if they do not become enforceable laws, are being translated as positive signals for illegal activities, traffickers and the corrupt.

Market operators claim that the euro is expected to be weak in the coming weeks, as historically in August currencies are weak due to the seasonal effects of tourism and the return of emigrants.

"You will end up under the wheels of cars"/ The Police Agency starts the verifications for the Elbasan operative who caused a stir: We have also seen him with a snake in interviews. Used offensive language