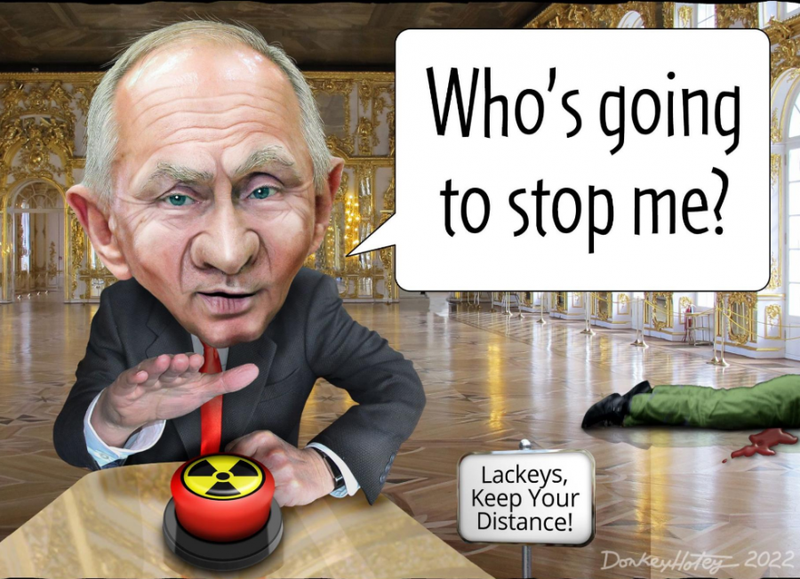 Russian President Vladimir Putin is fed up with the Ukrainian resistance, aided and abetted by the West. That is why he is now aiming for something much bigger. Putin warned it was no bluff, and Western politicians, diplomats and nuclear weapons experts are divided. Some say he may use one or more smaller tactical nuclear weapons to try to avoid military defeat, protect his presidency, scare the West or scare Kiev into capitulation. The Italian media reports on the start of a nuclear war, seeing the latest signals being given by Moscow. Russia has distributed iodine tablets to residents, medications that protect, to some extent, from radioactive substances. Tuesday, on the Russian Telegram channels appeared the news that Moscow was urgently buying large batches of iodine. Precisely, on September 26, a tender for the purchase of potassium iodide worth almost 5 million rubles (approximately 90 thousand euros) appeared on the website of the state procurement of the Russian Federation. This is the first concrete fact, after the activation of the Russian prevention system a few days after the invasion of Ukraine, which, beyond the statements of the leaders of both sides, testifies to the real danger related to the use of nuclear weapons by Vladimir Putin. This substance is actually necessary for the production of drugs against radioactive pollution. The supply is intended for the needs of the Pharmzashchita Research and Production Center at the Federal Medical and Biological Agency of Russia. According to the calculations of the Moscow newspaper MSK1.RU,

Vladimir Putin's move follows recent statements by NATO Secretary General Jens Stoltenberg and the US, which reiterated that the threat of a nuclear war would have catastrophic consequences. The state-owned company is engaged in the development and production of medicines, including those for the protection of people from the action of particularly dangerous factors. Iodine, for example, is also used in preparations to prevent thyroid cancer. Pharmzashchita produces potassium iodide in the form of tablets to prevent the accumulation of radiation in the thyroid gland. Since 2020, Pharmzaschita regularly buys this substance whenever the previously purchased batch runs out. But this time something has changed. Previously, the bid amount did not exceed $56,000, tenders were held once or twice a year and up to two weeks' notice was given to submit a bid. With the outbreak of war, in March the Federal Agency launched two consecutive tenders, each worth 1 million rubles (about 18,000 euros). Finally, the amount of the last order still in progress is several times higher than the previous ones (4,850,000 rubles) and only four days were given as notice for the submission of offers: applications will actually be accepted until September 30.

At the same time, yesterday the pro-Ukrainian Telegram channel Insider UA, citing "sources" from other Russian channels, reports that Russian troops in the Kherson and Zaporizhzhia regions are given iodine tablets and given chemical protective suits and other anti-radiation drugs . However, the channel itself warns that there is still no confirmation of this information. All this against the background of statements by Dmitry Medvedev that Russia has the right to use nuclear weapons if necessary and repeated statements by President Vladimir Putin that, in the event of a threat to its territorial integrity, Russia will use all means of protection. its destruction, including nuclear weapons.

Operation "blitz" in many cities to catch the "bosses" of crime in the country, the police come up empty-handed again, here are those wanted to be caught

He responded with a firearm to the killer of his friend Taulant Beqiraj, Sali Zeneli is arrested after more than 1 year in Vlora, this is how the serious event of March 3, 2021 happened