They did not wear masks, the police impose 356 fines, 7 people are escorted to the police stations (VIDEO) 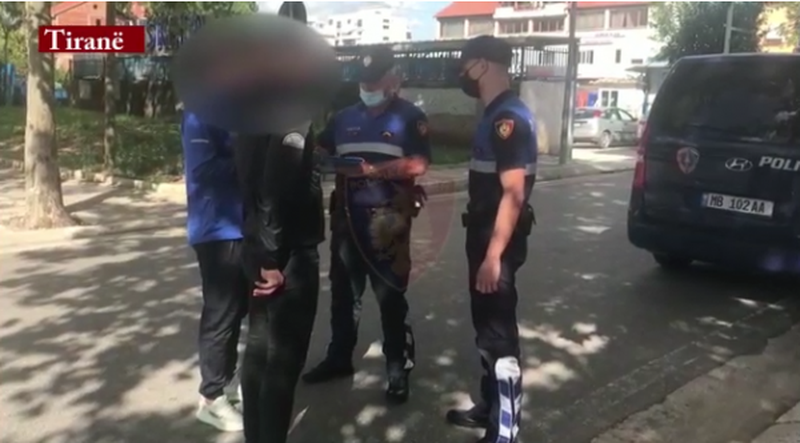 Police have continued to impose fines on citizens for not wearing masks by placing 356 such.

Controls to monitor the implementation of anticovid measures continue throughout the country.

In addition to fulfilling the functional tasks of preventing, detecting and combating illegality, Police officers have continued on-site inspections to monitor the implementation of the new measure to prevent the spread of COVID-19, the mandatory wearing of a protective mask, which is obligation for all citizens, from the moment they leave home.

During the last 24 hours, the Police services, during the controls, have noticed a significant decrease of citizens who do not implement the measure for mandatory wearing of a mask. Most of the citizens, both yesterday evening and today, had put on protective masks.

During the checks, citizens were found who had not put on their masks and for these cases, the Police services throughout the country have imposed 356 administrative measures with a value of 3,000 ALL each.

Even the number of citizens who have tried to avoid the administrative measure by not giving the generals to the police officer, when they were found without putting on the mask, has decreased during the last 24 hours. Accompanied in the premises of the Police throughout the country, 7 citizens, who after presenting the identification document were punished with the administrative measure 3000 ALL and were released.

The State Police has increased the presence of uniformed police services and Criminal Police officers in the territory, who continue patrols and controls throughout the country, to prevent and crack down on illegality, as well as monitor anti-corruption measures, which prevent the spread. of this virus.

The State Police thanks once again the citizens who respect this protection measure and appeals to everyone to put on protective masks, the owners of the premises to respect the security protocols and not to oppose the order of the Police employees, as the State Police is at the service of the citizens. to protect their lives and health, therefore it is important to implement this protection measure to prevent COVID-19 infection.

Meanwhile, the State Police invites citizens to support and cooperate more with the Police, to report to the number 112 and the Digital Commissariat, any illegality that violates the order and safety, life and property of citizens, guaranteeing full anonymity and response. immediate and impartial.

Ilir Demalia 'can not believe' what happened last night at the Building of the Polytechnic University of Tirana: This is a humiliation. Why should this opposition be trusted for tomorrow? (FOTO)

Vlora is shocked that in the morning, explosives explode on the door of the 69-year-old's apartment, the police give the first details

Adding cases with Covid, Dasho: It is the fault of the Technical Committee that dictates wrong treatment and the government that mocks the people

"He was treated with oxygen at home", the nephew recounts the last days of Avni Mula's life and his great desires

They made a name for themselves by robbing apartments in Vlora, 2 of the arrested are released, 3 others remain in prison

The murder of Santiago Malko, the prosecution demands the change of the accusation for one of the arrested, from premeditated murder to revenge murder

Cloudy and rainy, learn how the weather is forecast today and tomorrow throughout our country

"There is still hope", the well-known journalist makes the unexpected reaction: Confidential sources told me that Sali Berisha and Fatos Nano will form a new party

Avni Mula dies at the age of 92, his daughter makes a touching dedication