"You do not know who I am?", The journalist reveals the new details of what happened in Mamurras where the police shot 2 colleagues and the "strongman" after the quarrel 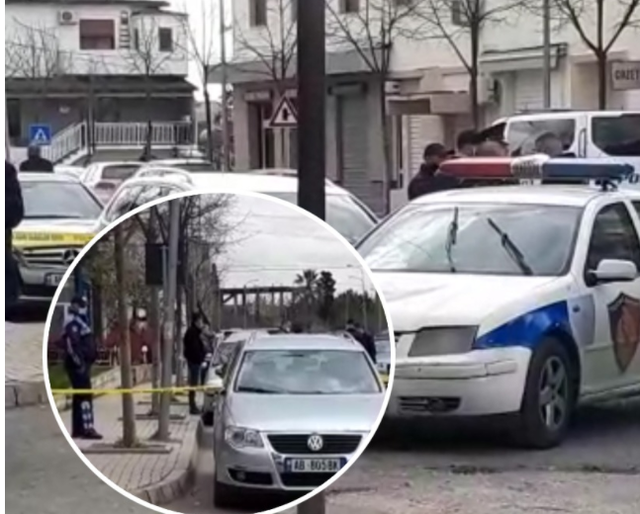 New details have been revealed of what happened today in Mamurras, where two police officers and another person were wounded with firearms.

The perpetrator of the injury was one of the patrol officers, David Magani, who after a quarrel between the police and several other people pulled out his service weapon and fired. As a result, two of his colleagues, Ilir Zekaj, and Flamur Lleja, were injured, as well as one of the persons involved in the conflict, Nikolle Vorfi, who are out of danger for life.

This person is thought to be the cause of the conflict. It is learned that Nikolle Vorfi (Fufi) was escorted to the police premises this morning but was later released.

Meanwhile, around 13:35, the police patrol spotted an 'Audi' car with three people in it.

As they signaled to stop, the driver disobeyed the order and fled. The police chased them and stopped them in the center of Mamurras, where they also had a physical fight. Several others went to the aid of the three people with "Audi". During the conflict, one of the police officers pulled out his weapon and fired, as a result of which the bullets were caught by his two colleagues and Nikolle Vorfin.

It is learned that the conflict in the center of Mamurras was initially started by the people in the "Audi" who addressed the effectives, showing the strength of the name they had created in the area.

"The people who were in the audi were initially addressed with incorrect language and also showed their identity. Saying "Why don't you know who I am?" This event is being investigated but politics is involved as they are well-known political adjectives. said journalist Kodra for the show 'Information Radar'.

"Starting from the surname, we are dealing with the former MP Mëhill Fufi. In Mamurras they get to know each other. If there have been previous conflicts. One of the persons of this event was accompanied in the morning. "Whether there will be a corrective action by the police or it has been in violation of the law." added the journalist.

Nikolle Vorfi (Fufi), is a relative of the former MP, Mhill Fufi, a name that is curved several times in sensational events. In 2016, Mhill Fufi was expelled from the PD parliamentary group after, contrary to the party's decision, he stood in the Assembly hall and voted for the law on the governing bodies of the judicial system. Fufi was later classified by the Prosecution as one of the deputies suspected of falsifying the decriminalization form. Fufi was later appointed director of Road Transport for the Lezha Region.

"For circumstances still unclear. The first was accompanied by Nikolle Vorfi who is one of the three injured. He is in the Trauma Hospital. He was shot in the leg. Vorfi was initially accompanied, but was released. It was then encountered by 3 persons within an audit. It has been a patrol. But they have not yet been questioned. Two others were accompanied to the Trauma. It was a three-man patrol that sought to stop Audi. Exactly this vehicle may have violated the rules. But on the other hand he did not obey the first order. The three employees followed him and were stopped in the center of Mamurras. At this moment there were 5-6 other people who cause near them. "They just fired hard objects because there was a physical fight." said journalist Kodra.

"One of the police officers claimed that there were signs caused by hitting with solid objects. Police on the other hand claimed to have taken a piece of lead. So a policeman injured two colleagues and Vorfin "

"I would compare it with the event of Klodian Rasha. We have the same dynamics. That we had several versions. "Now there is a step away from denying what was said at the beginning," the journalist added.

Currently, 9 people have been accompanied in connection with this serious event that has not yet been clarified. Two of the detentions took place at the Trauma Hospital, where Alfred Prenga and Gjon Fufi were escorted, the latter being the brother of Nikolle Fufi (Vorfit) who is also in the Trauma Hospital after being wounded with a firearm.