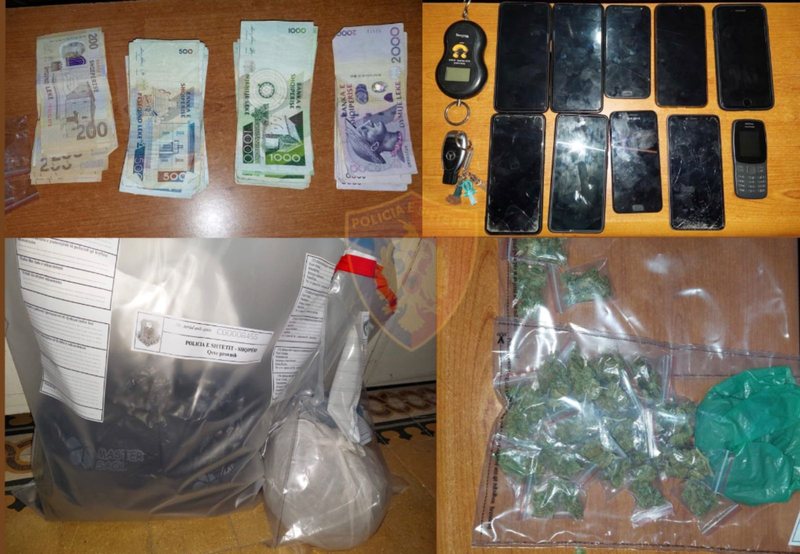 Consecutive attacks on criminal activity in the field of narcotics continue. The anti-drug operation codenamed "Lugaxhi" is finalized, developed by the Section for Investigation of Narcotics and Illegal Trafficking, in cooperation with the Operational Section in DVP Elbasan, under the direction of R Elbasan.

Seized cannabis sativa, doses of cocaine, a sum of money suspected to have benefited from the sale of narcotics, 3 vehicles, 1 motorcycle, 1 electronic scale used for weighing the narcotics and dividing it into doses, as well as 10 cell phones.

10 citizens are handcuffed and 1 citizen is prosecuted at large.

Following the work on the successive crackdowns on criminal activity in the field of narcotics, based on information that some citizens were involved in the sale of narcotics, the Section for Investigation of Narcotics and Illegal Trafficking, in cooperation with the Operational Section in DVP Elbasan, under The Prosecution at the Court of First Instance Elbasan, conducted the anti-drug police operation codenamed "Lugaxhi", in which citizens were arrested in flagrante delicto:

The citizen KP, resident in Elbasan, was also prosecuted at large, as in cooperation with the above-mentioned citizens, she is suspected of carrying out the criminal activity of distributing narcotics.

The arrest of these citizens was made after during the control of two vehicles driven by citizens AB and EQ, as well as during the control exercised in the premises of the citizen EQ, and the motorcycle driven by the citizen GM, the Police services found and seized in the quality of 5 kilograms of cannabis sativa, a portion made in ready-to-sell doses, doses of cocaine, 3 vehicles, 1 motorcycle, 10 mobile phones, 1 electronic scale, as well as a sum of money suspected to have been obtained from the sale of narcotics.

The materials were referred for further actions to the Prosecutor's Office of the Elbasan Judicial District, for the criminal offense "Production and sale of narcotics" committed in collaboration.