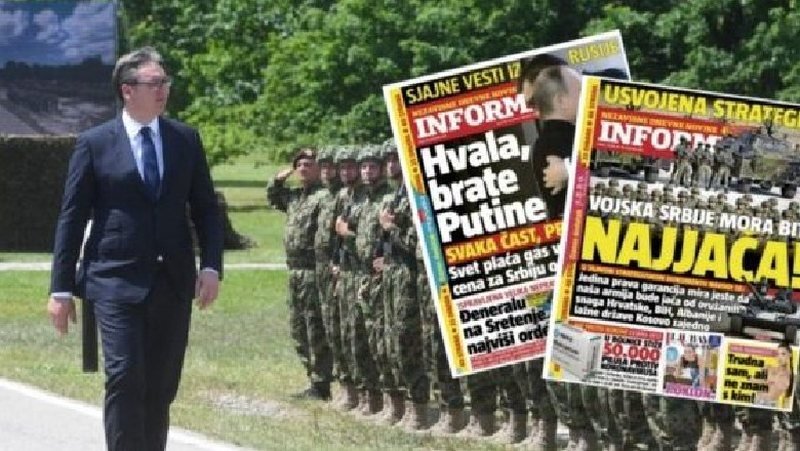 Recent purchases of heavy weapons from Serbia are part of a strategic plan to strengthen the army many times more than other countries in the region combined, with Albania as a potential enemy.

The Serbian state leadership has adopted a strategic document for the long-term development of the army. According to the Serbian magazine "Informer", this strategy for the first time in the last two decades determines the directions of development of the Serbian defense system. The document states that "our army must be stronger than all the other armed forces of potentially hostile countries in the region taken together."

"Analyzes show that we are now at about 65-70% of power in relation to the combined armed forces of Croatia, Bosnia, Albania and Kosovo. However, this is not good enough. "The new strategy aims to bring the Serbian army to at least 110% of the military power compared to these 4 countries in the coming years", writes this media, based on the document.

"Only if the Serbian army is able to resolutely and effectively neutralize the threats of all potentially hostile countries in the region can we say that there is a long-term guarantee for our peace and stability." Only if these countries know that a military confrontation with Serbia would cause them large disproportionate losses can Serbia plan its state and social development in the long run. Therefore, it is estimated that it is necessary for the Serbian army to reach 110% of the force, in equipment and personnel of these 4 potentially hostile armed forces in the region ", it is said, among other things, in the draft strategic document, published by" Informer.rs " .

"It is no coincidence that our army needs to be strengthened to the extent that it can fit in with all the countries in the region together. Countries from our environment are uniting against Serbia politically and militarily and are no longer hiding it. Occasionally, Croats and Albanians call each other 'brothers in arms' and threats also come from BiH, where they constantly wield their weapons. Therefore, the Serbian army must be strong enough to be able to organize defense against all those from the environment who can unite against us. "This is the best guarantee of peace, when no one should think of attacking us." According to official long-term projects in Belgrade, Albania is classified as an "enemy", along with Croatia, Bosnia and Kosovo.