The court of Tirana obliges the American Hospital to pay compensation in about 500 million old lekë in favor of the citizen EZ, and her family, for causing damage.

In a decision taken a few weeks ago, the trial panel of the capital found that the young EZ suffered severe injuries to her upper limbs during health treatment at a private hospital.

After a series of hearings, which included orthopedic experts and representatives of the Institute of Forensic Medicine, the court concluded that the health service at the American Hospital had caused the plaintiff EZ considerable damage.

In the decision of January 11, 2021, the court decided that the American Hospital, owned by the businessman Klodjan Allajbeu, must pay the citizen EZ with a sum of 6.4 million ALL for the physical damage.

Also, the private hospital is obliged to pay another 60 thousand euros in favor of the injured party EZ as compensation for moral and existential damage.

The latter have also demanded compensation for the moral and existential damage caused to them by the actions of the American Hospital against their family.

The court, after analyzing the evidence, as well as based on the conclusions of the experts, has concluded that the request of the family members is fair and should be accepted.

Following this finding, the court decided the obligation of the American Hospital to compensate the relatives of the injured party EZ with a total of 350 million old ALL./BoldNews 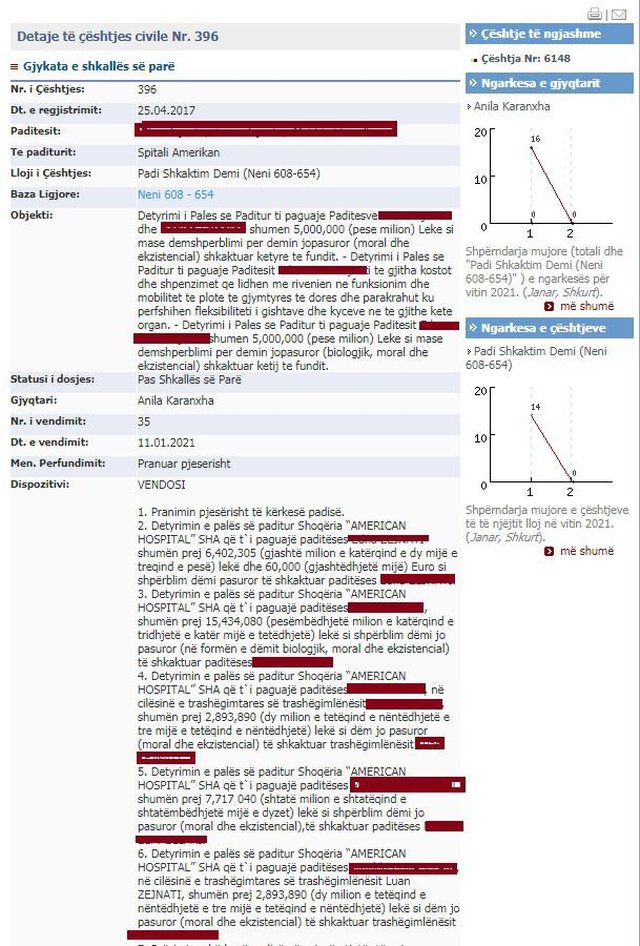 Manastirliu gives the important announcement, shows who are the people who will receive the following anti-Covid vaccine in Albania: Started today!

Injured the two police officers, the name of the suspected AUTHOR is revealed (Details of how the quarrel started)

Reducing new cases, epidemiologist Alimehmeti has a tip for all those who have passed COVID now nearby

OFFICIAL DECISION! The agreement for the purchase of "Sputnik V" is approved, Albania will receive the Russian vaccine

Briken Çalja and Evangjeli Veli come with medals from Moscow, Veliaj welcomes them in his office: Municipality, additional budget for the preparation of the team for the Olympic Games

'I have connections with the government' / How the conflict started that ended with 2 policemen injured. The perpetrator allegedly objected to the search. The details of the serious event are revealed