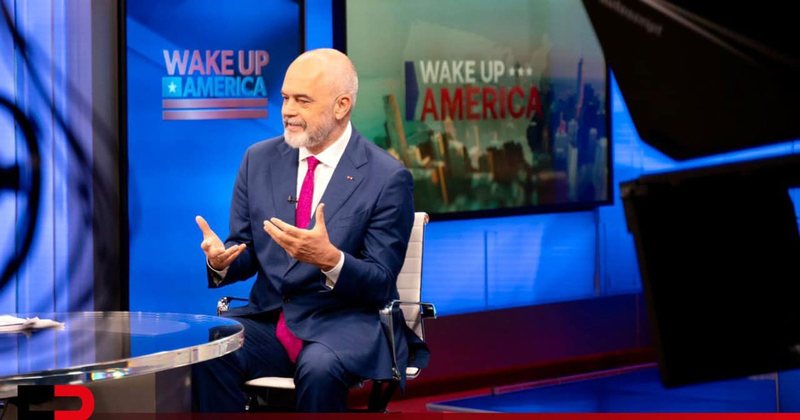 Economy journalist, Klodian Tomorri, through a post on the Facebook social network, has discovered that one night at the hotel where Prime Minister Edi Rama stayed in the Manhattan neighborhood of New York, costs $2,700.

Tomorri points out that the hotel is Baccarat and Rama stayed in a suite. The other members of the delegation also benefited from the generosity.

Tomorri adds that only the Prime Minister of Morocco and Rama have been in this hotel.

POSTING THE TOMB IN SOCIAL NETWORKS:

At the time of sacrifices
, the United Nations General Assembly was a very important event. The Prime Minister's staff had been carefully preparing the visit for some time. But damn something had gone wrong.
Although they had tried tirelessly to book a hotel with reasonable prices, they could not. As a result, they were forced to put the prime minister in the Harcourt suite of the Bacharat hotel in Manhattan. On this occasion, all the members of the Albanian delegation ended up in the same hotel.
The suite, which costs $2,700 a night excluding taxes, offers an amazing view of Manhattan. Certainly an environment worthy of leadership.
As soon as he entered the room, a text message arrived on the prime minister's cell phone. It was the deputy prime minister who forwarded the message of the chairman of the Energy Regulatory Entity: "Boss, we made the price of energy as you told us, 42 lek for every kilowatt above the 800 kilowatt hour per month band." Greet the big boss from my side and tell him that we are here for anything you ask of us."
He read the message and returned a quick reply: "Very good. Don't forget, share the message that only 5 percent of families are affected. Meanwhile, from time to time you also say that in Switzerland they put you in prison, you were wasting a lot of energy" - ordered the deputy.
Ne sportel, para se te hynte ne dhome kishte marre vesh qe nuk ishte udheheqesi i vetem i akomoduar ne ate hotel. Ne te njejtin kat po qendronte edhe kryeministri i Marokut. Edhe ky me delegacionin e tij, bylyk.
Ne fakt, ne sumitet nderkombetare vihet re nje korrelacion statistikor shume interesant mes GDP per fryme te nje vendi dhe shpenzimeve te akomodimit te udheheqesve. Sa me i varfer te jete nje vend, aq me i shtrenjte eshte hoteli ku gjendet udheheqesi i tij. Kjo lidhje eshte dokumentuar gjeresisht, megjithese studiuesit ndahen mbi shkaqet e ketij fenomeni. Disa thone se buron nga korrupsioni. Te tjere nga mungesa e kultures, ndersa nje grup e shpjegon me institucionet e dobeta. Por ky eshte debat studiuesish, qe per popullin nuk ka shume interes.
Sacrifices are of interest to the people. And this is exactly the time of sacrifices. For all.
Petrit Ahmeti made the great sacrifice by doubling the price of energy for Albanian families. With a broken heart. The government was making a great sacrifice by telling the people half the truth, that only 5 percent of families are affected. In the account, they forgot to remove from the division the bills with zero consumption, which are over 120 thousand, and they averaged the annual consumption as a representative of the consumption in the winter season. The Prime Minister was making the sacrifice protecting Albania's interests at the UN.
Everyone was sacrificing a little. Each according to possibilities. It's just that some sacrifices are sweeter than others. But as someone has said. Half truths are the biggest lies. Except half of the truths that the government says.