The tragedy in Himarë, the shocking account of the witness who saw the scene: It was a very serious situation, someone took the girl by the arm, threw a towel at her and... 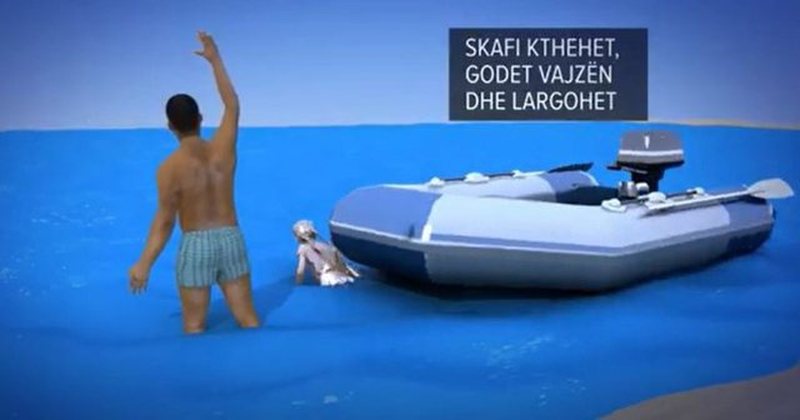 New details have come to light from the tragedy in Himare, where Joanda Avdia, a minor, lost her life.

Joanda Avdia was bathing in the sea where she was first hit by the front part of the dinghy and then her body was cut by the propellers, dying on the spot.

The incident happened around 14:00. The leader of the raft was the head of community policing in Elbasan, while the head of the State Police, Gladis Nano, finally expelled Arjan Tasen from the police.

Bledar Avdia with his 7-year-old daughter Jonada were standing on the seashore in Potam. Although they didn't know it, Babe and daughter were living their last moments together. Then came the fateful minutes for the Avdia family. A boat that came from the sea, cruelly took the little girl's life.

What happened in those minutes and what actions did commissar Arjan Tase that brought about the tragedy? An eyewitness who was 10 meters from the scene tells how Arjan Tase committed the serious crime.

Shocking testimony of the witness:

A boat approached the beach, where many vacationers were bathing, the boat anchored to the shore, ignoring all the vacationers who were on the shore and in the sea. There he picked up a few people and then made a very quick, sudden movement behind, a few meters, trying not to let the propellers of the boat hit the rocks, and at that moment the vacationers became alarmed, many people shouted to the boatman that to stop, the second moment was when the author tried and took the boat out with a very powerful motor movement parallel to the seashore, there we saw many people who were in the sea, let's say they were affected by this movement, they were even more alarmed a lot.

We saw that the girl's father was hit by the boat, where we could see his head go under the boat, even though we all as vacationers screamed, we tried to stop the perpetrator, the perpetrator ignored us all, did not deign to answer us or do an action that could have prevented this tragedy.

The author with this exit parallel to the coast, takes the direction of the boat to the south, gave it more gas to start from the coast and at that moment we saw a lot of blood on the propeller part of the engine...

At that moment everyone was alarmed, we told him, we shouted at the author to stop, he tried to run away even after seeing this scene, fully conscious, the author was calm, we did not see any change in his behavior, all the time he was conscious and we all went to grab the boat and with our hands pulled it ashore.

At that moment, we also saw the girl's body that someone had taken out, the girl's body was torn apart by the propellers of the boat, someone threw a towel over her body... it was a very, very serious situation", says the eyewitness.