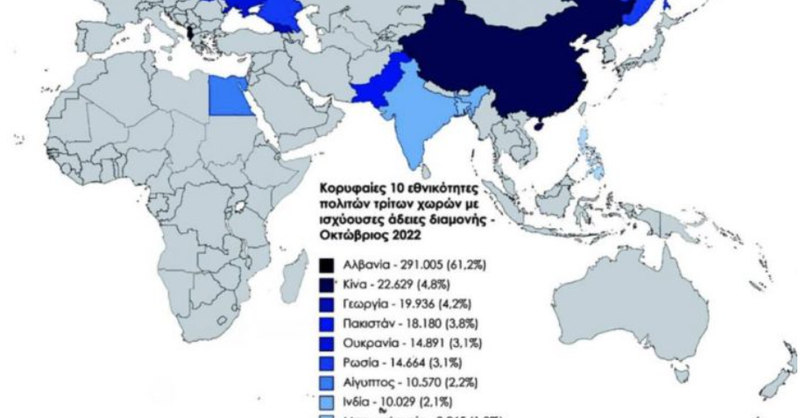 Requests for asylum from Albanian citizens remain high in Greece as well as Great Britain and some European Union countries such as Germany and France.

According to the data of the Greek Ministry of Migration and Asylum, in the first ten months of this year, 1,113 requests for asylum were submitted by Albanian citizens to the Greek regional centers for asylum seekers.

According to these data, Albanians constituted about 4% of the asylum requests made by citizens of third countries, which totaled about 28,055.

The majority of asylum applications in Greece are made up of citizens from Afghanistan, Syria and Pakistan, who also have the highest number of asylum recognitions.

According to the data of the Greek Ministry for Migration and Asylum, Albanians constitute the category with the smallest number of recognitions, as only 0.18% in category "a" and 0.80% in category "b" have managed to benefit from asylum in the last 10 months. of 2022.

This, since Greece for several years considers Albania as a "safe country" and there are fewer and fewer opportunities for Albanian citizens to be referred to asylum.

According to the Albanian immigrants themselves who apply for asylum, in many cases their requests are related to avoiding deportation to Albania.

Meanwhile, Albanians are ranked third in the 10 nationalities with appeals made to cases where they were refused asylum based on requests submitted this year or last year.

According to the Greek Ministry of Migration and Asylum, 1,156 Albanian citizens appealed the decisions for the refusal of asylum and constituted 10% of the total appeals of foreigners (13,614 in total) in the ten months of this year.

Meanwhile, the data just published by the Greek Ministry of Emigration for regular foreigners with a residence permit in Greece say that in October the number of Albanians was 291,005 people who make up 61.24% of the 475,225 regular foreigners in Greece.

For the requests submitted in 2021, the permits have been granted, mainly to citizens of Albania, Georgia and Pakistan, while for the initial requests that were filed in the first 10 months of 2022, in the countries with the most people who have received residence permits, there are citizens of Albania, Russia and China./VOA