Whiten the document and shocking information! The suspicions that linked Ervis Martinaj to the execution of Artan Santos. Here's what was found in the warehouse of the most wanted. The former prosecutor reacts

Ervis Martinaj's name came and weighed more strongly after he was talked about in sensational events. Another crime where he was rumored again, was the murder of the banker Artan Santo. According to the information at the time, it was suspected that the engine that was used by Santos' killers was hidden in Ervis Martinaj's warehouses in Fushë-Kuqe.

Based on this information, on June 27, 2014, the rapid intervention officers carried out a detailed inspection of his warehouses. Two similar spacesuits were found there, which later turned out not to be the same as those of the perpetrators of the crime. The verifications against Martinaj started after reviewing the security cameras where the perpetrators were seen near the place where he lived.

"Also, from our side, the server of the local "V" cameras was seized, and from the server we obtained a picture dated 17.06.2014, at 8:21 a.m., where the two suspected perpetrators appear with another motorcycle leaving the parking lot this bar. Based on the information, it turns out that Ervis Martinaj lives in the vicinity of this environment".

In 2015, he would be involved in another murder. After a verbal conflict, Martinaj's companions shoot and kill Enton Nika in the parking lot of a bar in Linza. 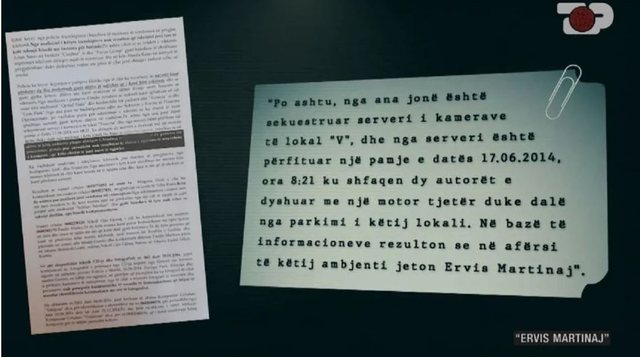 The event was filmed by security cameras. According to the court decision that Inside Story owns, Ervis Martinaj pleaded guilty to not reporting the crime, despite the fact that the data reveal that he was the initiator of the conflict.

Referring to the evidence in the file, as Martinaj and his friends were leaving the bar, he saw the owner Ismet Gaxherri and Enton Nikaj approaching. He stopped the armored vehicle he was driving, claiming that one of the people owed him money.

In these moments, Martinaj's friends hit Ismet Gaxherri with the butt of the pistol, keeping him neutralized. During the confrontation, the bullet that came out of Emiljano Tasho's gun killed Nikaj. He was sentenced for the murder, while Martinaj, who obviously had a leading role in the group, was sentenced only for not reporting the crime. His leadership role is also revealed when one of the group's followers asks them to kill the witness Gaxherri. But Vis orders him not to commit this crime.