The world on the verge of chaos: Pelosi lands in Taiwan, China threatens military action, US ships off the island, Russia joins the "war" 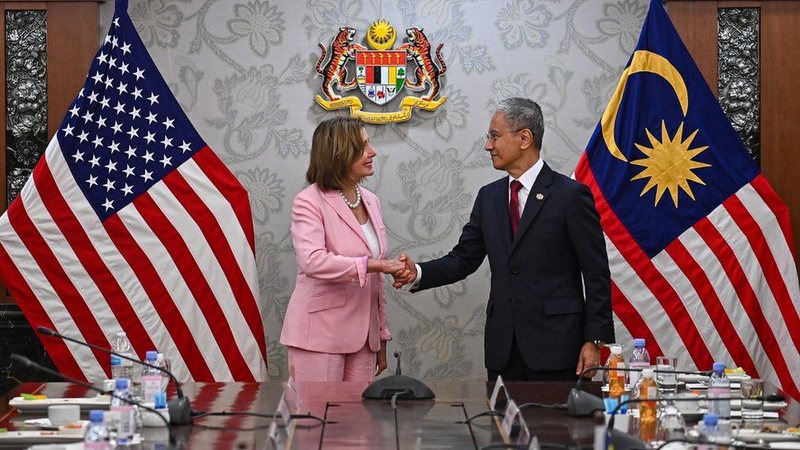 US House Speaker Nancy Pelosi landed in Taipei yesterday, marking an important show of support for Taiwan despite China's threats of retaliation for the visit. Regarding this movement, the Kremlin also intervened, warning the United States not to provoke China with this movement. Also four US warships, including an aircraft carrier, were positioned in waters east of the island. Pelosi and her accompanying congressional delegation said in a statement Tuesday that the visit "honors America's unwavering commitment to support Taiwan's democracy." "Our discussions with Taiwan's leadership will focus on reaffirming our support for our partner and promoting our common interests, including the advancement of a free and open Indo-Pacific region," the House Speaker's statement said. "America's solidarity with Taiwan's 23 million people is more important today than ever, as the world faces a choice between autocracy and democracy."

US House Speaker Nancy Pelosi's possible visit to Taiwan would damage relations between China and the United States. This was repeated by the Chinese ambassador to the United Nations, Zhang Jun. "Apparently such a visit is very dangerous, very provocative," Zhang noted at a press conference held on the occasion of China's presidency of the UN Security Council in August. "If such a visit happens, it will also damage the relationship between China and the United States," the diplomat added. Beijing also accused the United States of "betrayal" in the Taiwan issue and of being "the biggest destroyer of peace today." Some politicians "care only about their own interests,

Furthermore, "the situation in Taiwan is also changing with the support of some external forces. Taiwan's tendency towards independence is developing further. If we do not take appropriate and vigorous actions to stop it, the situation may even get out of control" , Zhang continued. The call to Washington is to "honor its commitment to the One China principle," which US President Joe Biden reiterated during a video call with Chinese leader Xi Jinping last week. Zhang concluded by assuring that " we will do everything possible to protect our sovereignty and territorial integrity."

Chinese ships and warplanes cross the middle line of the strait

China has retaliated, suspending food imports from more than 180 Taiwanese companies. Taipei media noted that the "sudden move by Chinese customs will cause a severe blow" to the local food industry, including agriculture and fishing. Based on the official findings, the customs have disputed "the violation of the relevant regulations and have urgently stopped the import". Since 2021, China has banned pineapples and other Taiwanese goods for the alleged presence of parasites and banned substances.