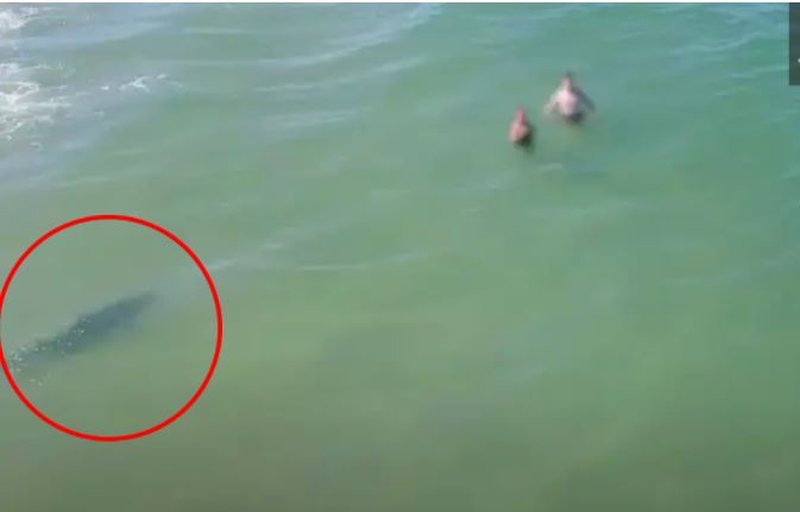 Chilling footage filmed by a drone in Florida shows a shark sneaking up on beachgoers.

The footage shows two men bathing on Daytona Beach as the silhouette of a shark swims towards them. The same shark swam up to another group of swimmers.

The terrifying clips were filmed by Robert Russ and his brother earlier this month.

Russ told Fox 35: "He swam toward a lot of people before he realized they weren't food."

"It was disturbing at the time to see the shark among them, as there are a lot of people bitten here, but according to confirmations they are generally unintentional bites."

Last year, unprovoked shark bites in the U.S. accounted for 64 percent of the global total, according to data compiled by the University of Florida.

47 confirmed cases of unprovoked bites were recorded in the US in 2021, more than anywhere else in the world.

Figures show that shark bites in the US have increased 42 percent from 2020, when only 33 bites were recorded, and of all states in America, the most bites occur in Florida.

The International Shark Attack File reports that blacktips, like the one captured in Russ's drone footage, are responsible for about 15 percent of unprovoked bites that have occurred since 1926.

Just last month, a man was left with a "shredded" leg after a shark attack at another Florida beach.

Who views your Instagram profile most often? This all-revealing trick is spreading fast

Why is eating this fruit considered a superfood? The latest study reveals surprising effects

The autumn equinox "shakes" the foundations, but these 4 Horoscope signs should not worry

She was a model, the Ukrainian refugee lured the owner of the company to leave the family (PHOTO)