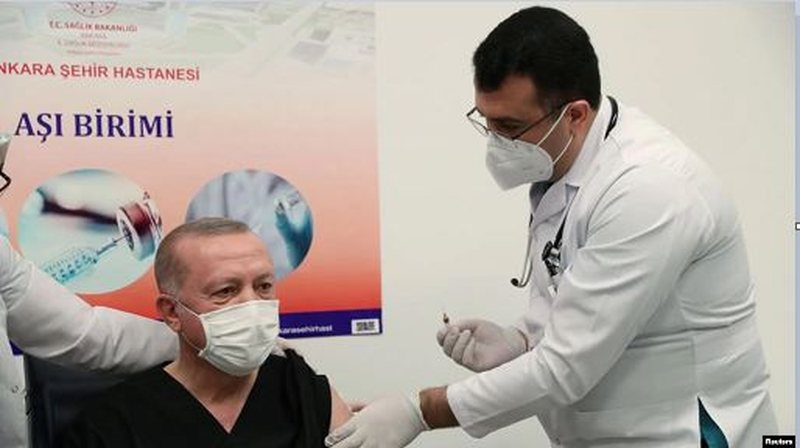 Turkey has finally started vaccinating healthcare workers with Chinese oil Sinovac, after a day earlier health authorities approved urgent approval for the use of the vaccine.

More than 250,000 people have already received the first dose, Turkish President Recep Tayyip Erdogan told reporters as he left a public hospital in Ankara where he received his first dose of vaccination.

Turkey plans to supply "another 25-30 million" doses of the Chinese vaccine, Erdogan said, promising a rapid mass distribution. He did not give an exact timeline. "We plan to inject all our citizens in a very short time," Erdogan wrote on Twitter.

Erdogan's announcement of the vaccination, along with some members of his ruling party, would help quell public skepticism about the vaccine, state broadcaster TRT reported.

The president called on political party leaders and members of parliament to "encourage" the public to join the vaccination campaign.

An opinion poll, conducted in November, showed that half of Turkish respondents did not want to get the vaccine. Turkey received 3 million doses of Chinese vaccine in late December and plans to buy additional doses from German pharmaceutical company BioNTech and US partner Pfizer.

Turkey, which has a population of 83 million, has so far reported a total of 2.35 million infected with the coronavirus and more than 23,000 deaths.