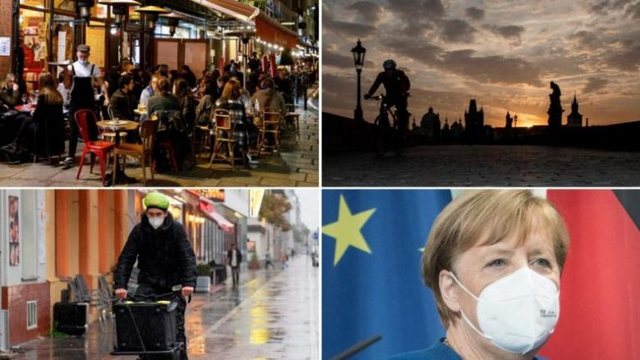 "We are facing very difficult months. "This way we will not be able to move on," German Chancellor Angela Merkel warned during a meeting with other members of her party.

Similar in France, Italy, the Netherlands, the Czech Republic, Austria, Slovenia, Belgium and Spain. In just 10 days, the number of people infected with COVID-19 has doubled, warning of tougher measures in those places that are already in isolation, Telegrafi reports.

France warns that the number of new cases with COVID-19 could go up to 100 thousand. The previous black record was 52,010 new cases of COVID-19 within 24 hours.

Classical isolation is already being applied by Belgium, Ireland and Wales. The state of emergency, among other things, is being applied in Spain and France, while Austrian Chancellor Sebastian Kurz has warned that the idea of ??isolation has not been rejected. According to him, this will be decided based on the number of cases in hospitals.

The country with the highest number of infected per capita is the Czech Republic. Prime Minister Andrey Babish has announced the extension of the state of emergency.

"If the miracle does not happen, we will have nothing left but to strengthen the protection measures," he added.

Schools and most shops are already closed, and many Czechs are not complying with the measures.

Slovenia has announced that from this week they will not be able to leave the country where they live unless they have an emergency.

Earlier they did not dare to leave the region where they live, and the curfew was applied from 21:00 to 6 in the morning.