US special envoy: Here is the main place that promotes anti-Semitism, spreads hatred with one click 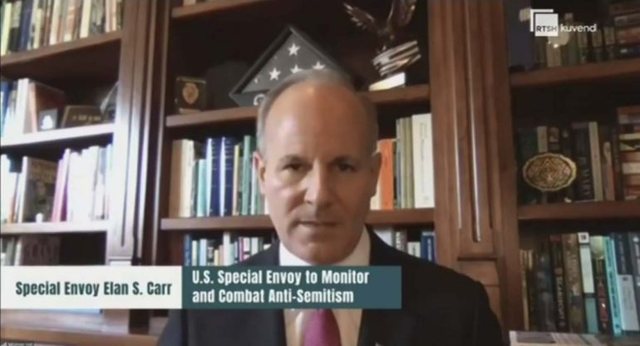 The U.S. special envoy for monitoring the fight against anti-Semitism, Elan Carr, told the Anti-Semitism Forum that there have been horrific anti-Semitic cases, adding that his mother saw his father being arrested.

In his speech, the senior official stressed that one of the most dangerous countries for anti-Semitism is Iran, as well as the extreme right and left, where all three of these forces operate through the internet promoting the disease of hatred towards Israelis.

"There have been terrible anti-Semitic cases. My mother saw my father being arrested. We have two different stories dealing with anti-Semitism and one story of tolerance. Albania is a fashionable country, where we want to see the whole world. There should be no lack of coordination, global organization is needed. Each country may have different anti-Semitic odors. Sometimes the extreme right is against the Israelis, the extreme left as well, so it is a big threat. Today one of the most dangerous countries is Iran, but the three forces operate together to incite this disease, which is hatred of the Israelis.

Also, they join in their attacks because the three have adopted the internet, social media, to spread their hatred and ideology with one click on the internet. For this reason anti-Semitism is on the rise. These hateful ideas are spreading through technology. We must confront them, face them in global endeavors. We need to focus on physical security first. "We are working with allies to ensure that Jewish communities are safe," he said.