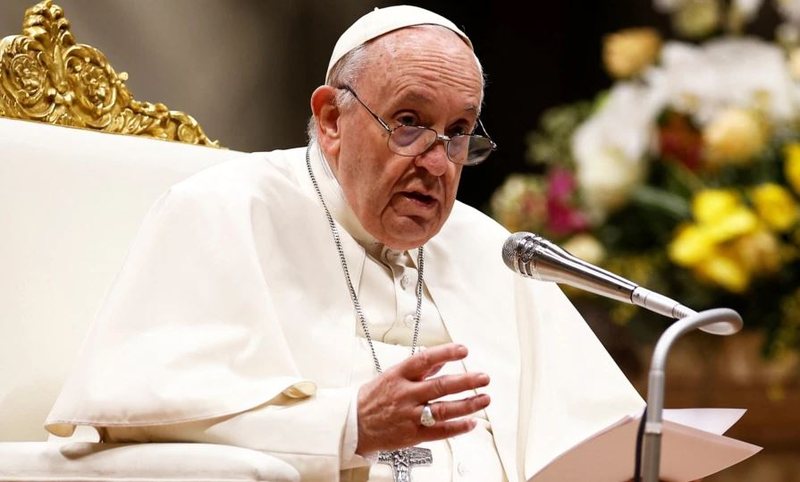 Pope Francis on Thursday accused Russia of waging a campaign of "armed occupation, expansionism and imperialism" in Ukraine, calling the conflict "a cruel and senseless war of aggression."

Speaking to the Orthodox delegation based in the Ecumenical Patriarchate of Istanbul, Pope Francis said the conflict has pitted Christians against each other.

Both Russia and Ukraine have orthodox Christian populations, but there is a Catholic minority with Byzantine influence in Ukraine loyal to the pope.

The eastern and western branches of Christianity split in the great rift of 1054.

"Reconciliation among divided Christians, as a means to contribute to peace between peoples in conflict, is of particular importance these days, as our world is embroiled in a cruel and senseless war of aggression in which many, many Christians are fighting each other. Said the Pope.

"The pope told his orthodox visitors, referring to Russia, that everyone should be aware that armed conquest, expansionism and imperialism have nothing to do with the kingdom that Jesus proclaimed on earth."

This was the second day in a row that the pope spoke about the conflict in Ukraine. On Wednesday, he condemned the bombing of a shopping mall in the town of Kremenchuk, calling it "the latest barbaric attack on Ukraine".

The war in Ukraine has caused great divisions in the Orthodox world. The Patriarch of the Russian Orthodox Church, Kirill, has given his full blessing to Moscow's occupation of Ukraine since the start of the conflict on February 24.

His position has shaken the Orthodox Church around the world and caused an internal rebellion that has led to the severance of ties of some local Orthodox churches once affiliated with the Russian Orthodox Church.

Russian President Vladimir Putin has described Moscow's actions in Ukraine as a "special military operation" aimed at demilitarizing and "denationalizing" the country. The Pope has rejected such terminology.

In an interview published last month, Pope Francis said that Russian Patriarch Kirill "can not become the son of Putin's altar." Subsequently, the Russian Orthodox Church criticized the pope over the comments made.

Pope Francis was scheduled to meet with Cyril on June 14 in Jerusalem but the plan was canceled in April following consultations with diplomats at the Vatican.

This would have been the second time the two leaders of the Christian Churches would have met. At their first meeting, in Cuba, 2016 was the first time a pope and a leader of the Russian Orthodox Church met.

Earlier this month, Britain sanctioned Cyril over "his vocal support for Russia's military aggression in Ukraine." On the other hand, Hungary blocked the EU attempt to sanction it./REL