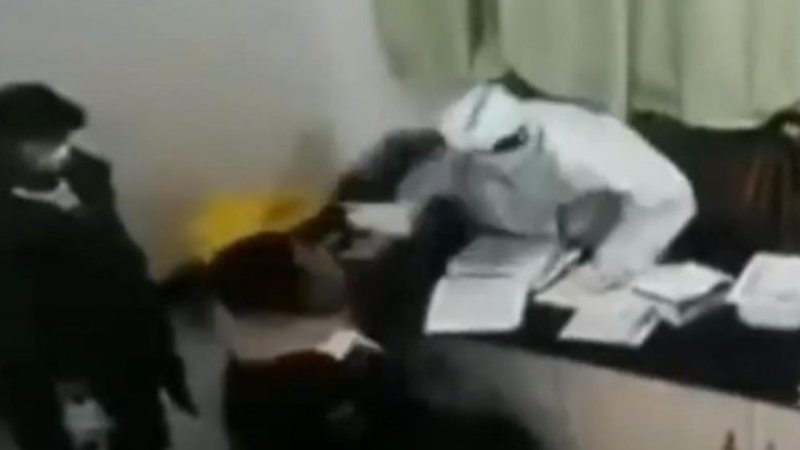 A man from China with his last name Lee has ended up in custody for seven days and has to pay 38 euros, after physically assaulting a nurse, who was doing coronavirus tampon.

Security cameras at a hospital in the Chinese city of Dilin have captured the shocking moment when a man slaps a nurse. The incident is thought to have occurred on November 22, while it has been made public recently. According to local media, the man was accompanied by his wife, where he had gone to the hospital to take the COVID-19 test.

After the incident, he is said to have admitted to the police that he had felt a kind of "scratch" in the throat during the sampling, and therefore hit the nurse with all his might.

Police also reported that Lee carried out the attack and that he felt remorse for it.

VOA: An Inauguration of Joe Biden Like No Other

Shocking study! Here's what happens to people who have won the war with the coronavirus

The good news! The decision that Joe Biden will make for immigrants once he takes the post in the White House is revealed

News that 33 people died after receiving the Pfizer vaccine invaded the pages of all world media, Norway makes the decision and closes the investigation: Here is what was revealed

21-year-old makes the unusual statement: Covid-19 saved my life, I am eternally grateful to the coronavirus

Turkish top diplomat makes strong statement and shows what will happen in the 21st century: It is expected to ...

The distribution of vaccines, the head of the WHO gives the alarm and shows who is becoming a serious danger: The world is on the verge of a catastrophic failure ... these actions will prolong the pandemic

"We have to get up and fight" / On the eve of Biden's inauguration, what is happening in the US after the strong warnings of the FBI?

"Preparing to…" / Here is the important decision that Donald Trump is expected to make shortly before his farewell from the White House. CNN reveals the plan that is expected to be realized

Noizy a few days ago released his latest song "1 time good (Vaccine)", which is ...

Aurela Hoxha is expecting her first child. The famous model, who for years has...

Today, Sara Hoxha celebrates her 25th birthday. One of the most special congra...

Singer Ermal Fejzullahu has always told us that he has a special connection with...

Moderator Ronaldo Sharka has trapped his colleague in the cooking show "Kafsho"....