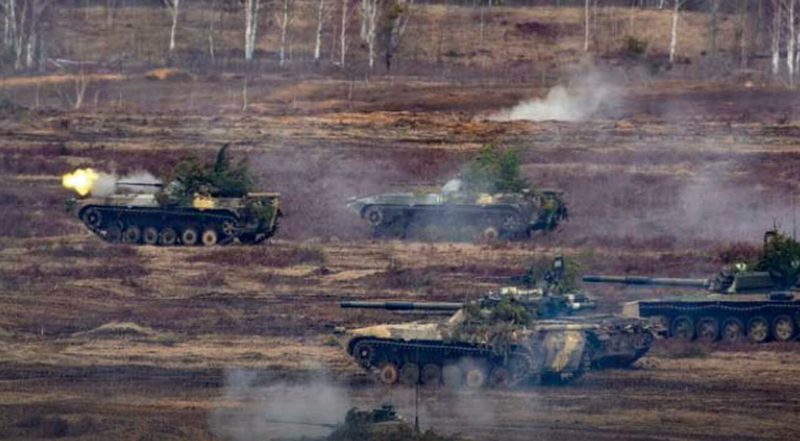 How likely is it that Belarus will go to war alongside Russia, against Ukraine and the Western powers? If a few months ago they were close to zero, today this hypothesis is not excluded at all. Belarus stated that it does not want war, but also said that it is ready to fight if its territory is invaded. With the departure of Vladimir Putin's ally, authorities in Kiev are worried about news of a growing call for Belarusian conscripts, in an undeclared military mobilization that is raising fears of a possible entry of Belarus into the war. "The hypothesis of a direct entry into the war of Belarus will increase in relation to Russian successes," said Ukrainian Foreign Minister Dmytro Kuleba. To prevent the expansion of the conflict, Britain imposed sanctions on Belarus yesterday.

Lukashenko: They are provoking us

Lukashenko explained that his army intercepted and neutralized a missile attack coming from Ukrainian territory. "They are provoking us", said the Belarusian president. "Thank God, the Pantsir anti-aircraft systems managed to intercept all the missiles fired by the Ukrainian armed forces," Lukaschenko continued, reiterating that no troops from his country are involved in the so-called Russian "special military operation" in Ukraine. Beyond words, suspicious movements have been reported across Ukraine's northern border. The General Staff of Kiev denounced a "hidden mobilization", as well as training for new recruits planned for the coming weeks. The online newspaper Zerkalo, close to the Belarusian opposition, noted that many readers from the Gomel region, bordering Ukraine, report the arrival of orders to

The position of Belarus

Belarus is a staunch ally of Russia. Russian missile and air attacks against Ukraine started from its territory, while on February 24, Moscow's forces entered Ukraine from the border with Belarus. In any case, so far Minsk has not entered the conflict directly. However, in the early days of the conflict, Russian Tu-22 Backfire bombers used Belarusian airspace to launch coordinated cruise missile strikes against targets located inside Ukrainian territory. The Ukrainian Air Force saw a week ago six Russian Backfire bombers flying over Belarusian airspace, which fired 12 Kh-22 missiles at targets located in Kiev, Chernihiv and Sumy. "Today we are being criticized for being the only country in the world that supports Russia in its fight against Nazism. We support and will continue to support Russia," Lukashenko said recently. The latter also announced that the Belarusian armed forces have orders to hold power centers in western capitals at gunpoint. We recall that in June Putin revealed that he would soon deliver to Belarus the Iskander-M missile systems capable of launching missiles with nuclear warheads. For his part, Lukaschenko emphasized that Minsk and Moscow should be ready to deploy the "most serious weapon" to protect themselves from external attacks. The fear that any pretext for war could include Belarus is growing more and more. Confirming what has been rebuilt, the UK has announced new sanctions against Belarus, including a trade embargo worth around £60m, for its role and support for Russia in the invasion of Ukraine. The sanctions were announced by Her Majesty's Ministry of Foreign Affairs, Commonwealth and Development. These consist of banning imports of Belarusian steel and iron and the export of refined petroleum products, advanced technology and luxury goods to Belarus. The sanctions will come into force next and also include banning Belarusian companies from issuing shares in London.

The woman who lives completely alone on an island in the Adriatic Sea, this is why she has never thought of leaving

A video is published that is 'breaking' the network/ The young man makes a heroic gesture, jumps on the train tracks to save a man's life

The situation is seriously escalating/ Oil is burning, the fire involves deposits in this state, there are dead and injured

"There will be enough of..."/ The British general shocks with the statement and reveals the upcoming plan: This is when Russia can use nuclear weapons