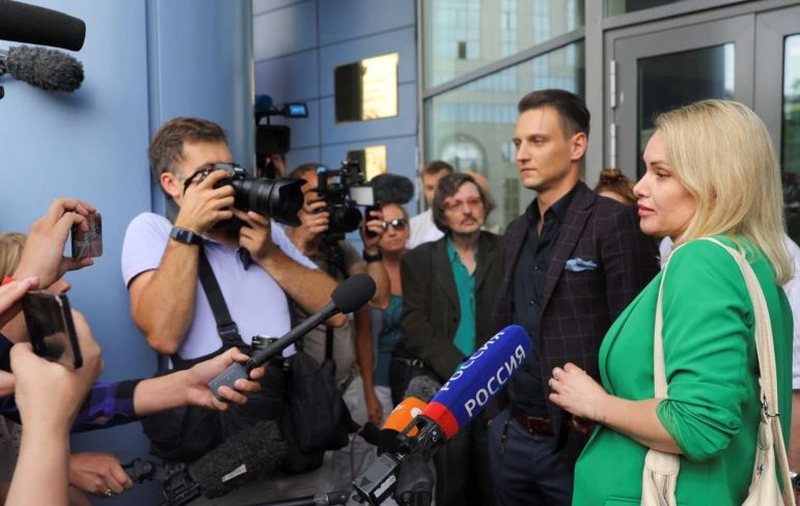 Russian TV journalist Marina Ovsyannikova, known for her protest against the war in Ukraine in a live broadcast, has been sentenced again for "discrediting" the country's armed forces.

A district court in Moscow on August 8 ordered the former Channel One editor to pay a fine of 40,000 rubles ($660) for her recent online posts protesting Russia's ongoing war in Ukraine.

Ovsyannikova's lawyers insisted that the latest charges be returned to the police, as they said their client was wrongly informed about the case against her, because the investigators had sent the letters to the wrong address.

Ovsyannikova said at the hearing that she was informed about this case by other journalists while she was abroad.

Last week, the same district court in Moscow fined Ovsyannikova 50,000 rubles ($825) for protesting the Russian occupation with a sign reading "Putin is a murderer, his soldiers are fascists," along with some photos of children killed in Ukraine.

Marina Ovsyannikova was a producer at Russian state television, Channel One. State television is the only source of news for millions of Russians.

On March 14, the journalist appeared live during a news broadcast on Russia's state-run Channel One, holding a sign behind the presenter condemning the war in Ukraine.

The inscription in Russian read: "No to war." Stop the war. Don't believe the propaganda. They are lying to you here."

Ovsyannikova was a producer at Russian state television at the time of her protest. She was later arrested and fined 30,000 rubles (about $500) by a court for calling for illegal protests.

She resigned from Channel One and spent several months abroad, including in Ukraine, repeatedly expressing her opposition to the war./REL