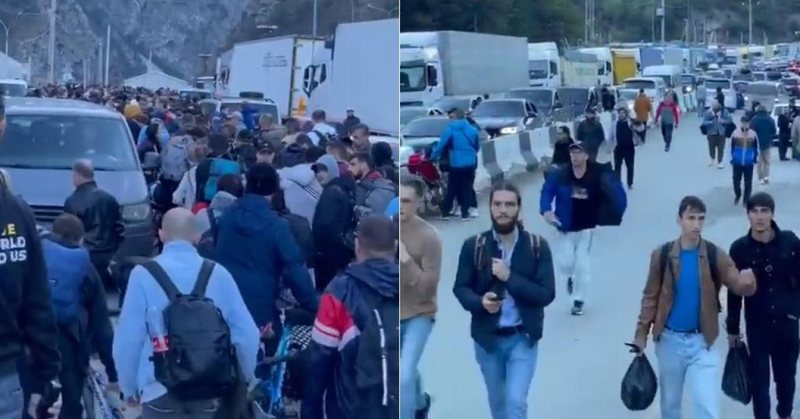 Long queues of vehicles form at various border crossings between Russia and neighboring countries, as the first post-World War II mobilization forced many men to flee. The head of a checkpoint in the town of Altanbulag said more than 3,000 Russians had entered Mongolia through the crossing since Wednesday.

Rumors are getting stronger that at the end of September, the Kremlin will make a decision to close the Russian borders, which was the reason for many people to go to Finland, Georgia, Mongolia, Kazakhstan...

Although people continue to flee, the Kremlin has not yet taken a decision to close the Russian borders, but it is significant that soldiers appeared at the border points yesterday.

However, the independent Russian portal Meduza, which operates from abroad, writes that the Russian authorities plan to close the borders to men of conscription age after the "referendums" currently taking place in the "self-proclaimed people's republics" of Donetsk and Lugansk and the occupied territories of Ukraine in Kherson and Zaporizhia regions. Those 'referendums' end on Tuesday evening.

Photos taken Sunday by Maxar Technologies satellites show that queues on the roads on the Russian side of the Russian-Georgian border are sometimes as long as 16 kilometers, writes CNN.

CNN reported earlier Monday that social media was flooded with photos and videos taken on the Russian-Georgian border, particularly at a border crossing in the hills.

Drone footage released on Monday shows hundreds of vehicles on the Russian side of the Russian-Georgian border. Witnesses claim that the wait for entry into Georgia from Russia can be up to 48 hours.

CNN reports that Russian security forces arrived at the aforementioned border crossing in an armored vehicle.

Since Russian Federation President Vladimir Putin ordered the partial mobilization of reservists last week, queues have formed at the Verhni Lars border crossing between North Ossetia and Georgia. Videos recorded at that border point show cars full of Russians who want to leave their homeland, but also more than 100 individuals with travel bags who intend to cross the border on foot.

Georgian opposition politician Nona Mamulashvili said opposition parties are asking the Georgian government to impose a visa regime or close the borders due to the influx.

As CNN writes, the Russian-Georgian border is still not closed.

The number of Russians who entered Finland through the land border with Russia on Sunday doubled compared to the previous Sunday, the Finnish border guard announced.

On Sunday, 8,314 Russians entered Finland through the Finnish-Russian land border - twice as many as a week ago, Matti Pitkäniitty, the border guard's head of international affairs, tweeted.

On Monday evening, Pitkäniitty wrote that border traffic is still high and that 80 percent of Russians crossing the border are in transit to other Schengen countries.

"We monitor the number of asylum seekers and illegal border crossings," he wrote.

Including Saturday's figures, a total of 16,886 Russians arrived and "many were in transit to other countries," he added.

What is happening in Europe? The area around the Ukrainian embassy in Madrid is blocked, the bomb alarm is raised