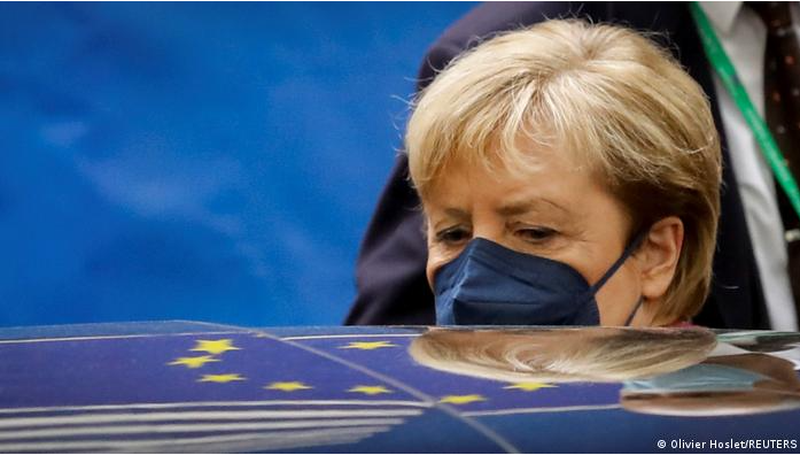 A video that lasted two and a half hours with images from the most interesting moments of the EU summits with a piano music column. One speech, in which it was emphasized, an EU summit without Angela Merkel is like Paris without the Eiffel tower or like Rome without the Vatican. And a sculpture as a farewell gift, presented by the European Council in Brussels. This is how farewell was said to Merkel by the head of the EU Council, Charles Michel, and 26 counterparts and counterparts of the German Chancellor from the member states. Given the fact that the Social Democrat Olaf Scholz will probably take over the post of Chancellor at the next summit in December, this 107th EU summit is the last for Chancellor Merkel.

"An oasis of calm within the EU"

While Austrian Chancellor Alexander Schallenberg described Merkel as "an oasis of peace within the EU" and "definitely a great European", the Luxembourg prime minister revealed a secret when he said: "Most people do not know "But Mrs Merkel was a compromise machine." And: "I will miss her very much."

In fact, it is Merkel's ability to mediate between different positions in the EU that what 26 EU leaders may lack from now on.

Lithuanian President Gitanas Nauseda called it "a factor of stability" that has been absolutely necessary in difficult political times. For that, he said, I really appreciate it.

Angela Merkel herself chose very few exciting words when she appeared before reporters after the two-day meeting in Brussels. She said, that he leaves at a time, which creates her concern. "We have been able to face many crises." But: "The problems open to my successor are great."

The two topics that, according to Merkel, concern the union the most are migration and the protection of the rule of law, and these two topics also dominated the EU summit.

Polish Prime Minister Mateusz Moraviecki was in focus. Poland has been systematically reconceptualizing the justice system for years. Although this topic has long divided the union, the Polish Constitutional Court has taken the debate to a new level, after ruling that parts of EU law do not comply with national law in Poland. At a news conference after the summit, Moraviecki accused some EU countries of failing to understand Poland's justice reform. Poland has no problem with the rule of law, according to him.

But many EU heads of state and government have a different opinion. The President of France, Emmanuel Macron, demanded "concrete gestures" from the Polish government.

Belgium EU Gipfel Treffen
Poland also plays a crucial role in Brussels over the remaining controversy over asylum and migration policy in the EU. Like other EU countries, Poland accuses Belarus's neighbor, Alexander Lukashenko, of pushing for refugees and migrants to enter the EU through Poland, Lithuania and Latvia.

Angela Merkel called the move a "hybrid threat" and "political instrumentalization" at the expense of the people. All EU countries share this view, but on the other hand are not unanimous in how they should react to this situation.

As Germany proposes sanctions, a number of EU countries, including Poland, Latvia and Lithuania, are demanding more money and aid to protect the EU's external borders.

The dispute over asylum and migration policy has preoccupied the EU for years. Although the EU Commission in the autumn of 2020 introduced a new migration pact, since then nothing has moved. Gerald Knaus, chairman of the European Stability Initiative think-tank, is concerned about the situation on the EU's external borders with Belarus: "We will experience how people die in winter because the EU does not allow them to enter. That's horrible. "

That the issue of migration in the union has not been resolved yet, said Chancellor Angela Merkel, this makes the EU fragile from the outside. Merkel herself after 16 years in office has not managed to negotiate a solution, even though it is considered a "compromise machine".