Japanese supercomputer makes surprising discovery about COVID-19: Is this the main culprit for the increase in the number of people affected by the virus ?! 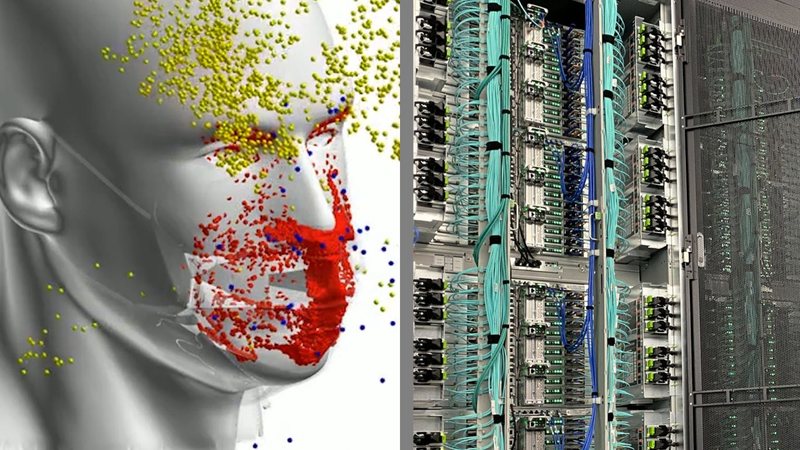 A Japanese supercomputer showed that humidity can have a major effect on the distribution of virus particles, indicating increased risks of coronavirus infection during the winter months.

The finding suggests that using moisturizers may help limit infections during times when window ventilation is not possible, according to a study released Tuesday by research giant Riken and Kobe University.

The researchers used the Fugaku supercomputer to model the emission and flow of virus-like particles from infected humans into a variety of indoor environments.

Humidity lower than 30% resulted in more than twice the amount of particulate matter compared to levels of 60% or higher, the simulations showed.

The study also showed that clear facial shields are not as effective as masks in preventing the spread of freckles. Other findings showed that during dinners, people are more at risk compared to the hours beyond the table, and the number of singers in the choir should be limited and divided, Reuters quotes.

There has been a growing consensus among health experts that the COVID-19 virus can be spread through the air. The U.S. Centers for Disease Control and Prevention (CDC) revised its guidelines this month to say the pathogen can stay in the air for hours.

The Riken research team led by Makoto Tsubokura has previously used the Fugaku supercomputer to model infection conditions on trains, workspaces and classrooms.

In particular, the simulations showed that opening windows on passenger trains could increase ventilation by two to three times, reducing the concentration of ambient microbes.

President Donald Trump casts his ballot in Florida: I voted for ...

"There is a need for mental treatment", France-Turkey relations at the height of the crisis, Macron makes the move that was not expected after Erdogan's sensational statement

"Shops close at 20.00", Brussels enters the curfew, the extraordinary measures that have been imposed are revealed!

He said that the masks do not protect you from the coronavirus, the best German doctor is "attacked" after the statement that surprised everyone

We are at the end of October! Scientists are shocked by what they see from the Arctic ice

In the event of an influx of people with coronavirus, this is the state that will deny hospitalization to people over 85

Terror is spreading! Renowned virologist gives the news we should all read: Covid-19 is not a plague! We must end this hysteria

What is happening, the army on the road again? The Italian president convenes the Supreme Defense Council on the situation created by Covid

(VIDEO) The situation gets out of control, violence and clashes / "Runaway", protesters against anti-covid measures attack the journalist, follow him from behind and…