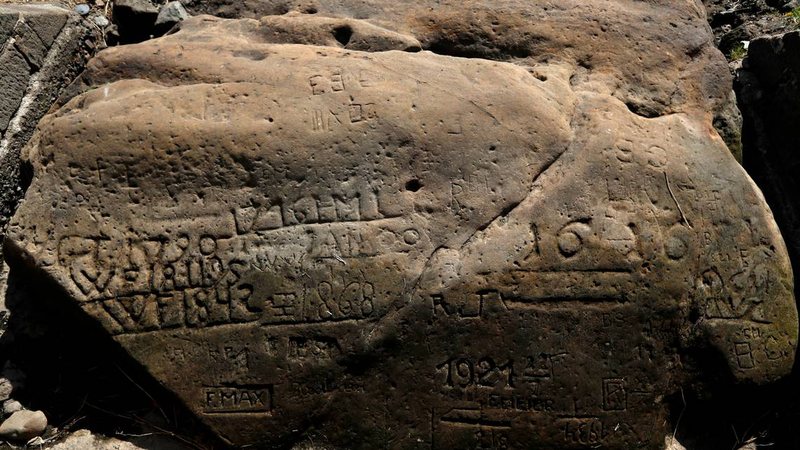 Water levels have dropped in major rivers across Europe as the region suffers a historic drought. In those dry riverbeds, centuries-old warning messages have emerged, locals report.

The "terrible" stones are known as "Hungersteine," or "Hunger Stones," German reporter Olaf Koens said in a tweet on Aug. 11.

One of these stones is embedded in the Elbe River, which runs from the mountains of the Czech Republic through Germany to the North Sea.

The recent droughts in Europe once again made visible the "Hunger Stones" in some Czech and German rivers. These stones were used to mark desperately low river levels that would forecast famines.

The stone, dating from a drought in 1616, is again visible in the dry river bed. The warning reads, "Wenn du mich seehst, dann weine" - "If you see me, cry".

"Hunger stones" like this one were used as "hydrological landmarks" across central Europe, NPR reported when the stones last appeared during a 2018 drought.

These stones are "carved with the years of hardship and the initials of the authors lost in history".

Basic inscriptions warn of the consequences of drought. The drought had brought a bad harvest, food shortages, high prices and starvation for poor people. The stones commemorate historical droughts.

Europe's current drought is certainly historic. Scientists at the European Drought Observatory said the drought is on track to be the worst in 500 years.

According to the drought observatory, 47% of Europe is in drought warning conditions, which means that the soil has a moisture deficit. Another 17% is in standby, meaning vegetation in the area is being affected by dry conditions.