The death of the 23-year-old causes chaos, protesters attack whoever is in front, 4 police officers are injured, the Minister of Interior strongly condemns the event 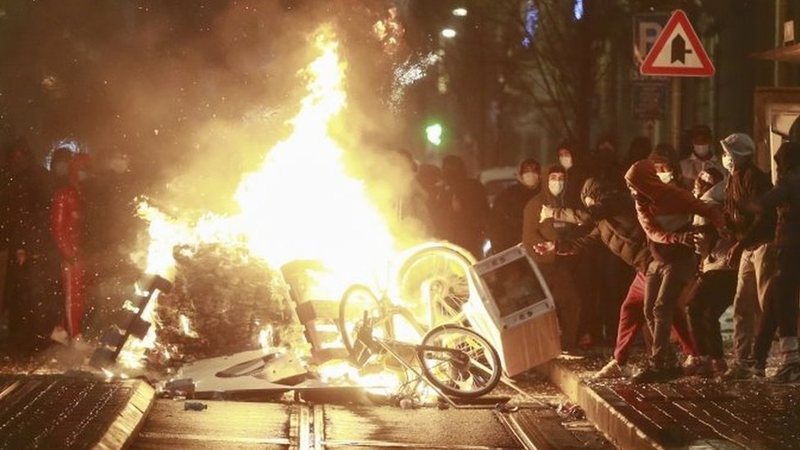 Wednesday night closed with violent protests that resulted in the death of a 23-year-old man arrested by police over the weekend. King Philippe's car was hit by protesters as it passed through the area and a police station was set on fire during the protest which caused chaos through the city streets.

According to police records several people were arrested while four police officers were injured.Police said about 500 people gathered on Wednesday near the police district north of Brussels for the death of a person identified by Belgian media as Ibrahima B.

Ibrahima B was arrested Saturday night after fleeing from police who were checking groups suspected of violating anticovid measures.

Officials say he lost consciousness after being taken to the police region and transported to hospital, where he died an hour after his arrest.

The reasons for his death are still unclear, but police oversight bodies have opened an investigation into the incident, according to the Brussels public prosecutor's office.

On Wednesday afternoon the protesters marched towards a police station in the center demanding the truth about the death, before the protest turned violent.

Interior Minister Annelies Verlinden condemned Wednesday's events as "completely unacceptable" and tried to reassure the public about the investigation.

"We will pursue the case and take the necessary steps to also punish police misconduct," Verlinden said.

"But today, there is no reason to do so and the violence is unjustifiable."

See what's going on in Joe Biden's new office, the footage is making the rounds of the world

Parliament approves the bill, this is how much Greece will expand in the Ionian Sea

"Aliens have invaded us", a stratospheric number of reports of UFOs in Italy, here is the unprecedented case of radar being caught at Milan Malpensa Airport and connection to the COVID-19 pandemic