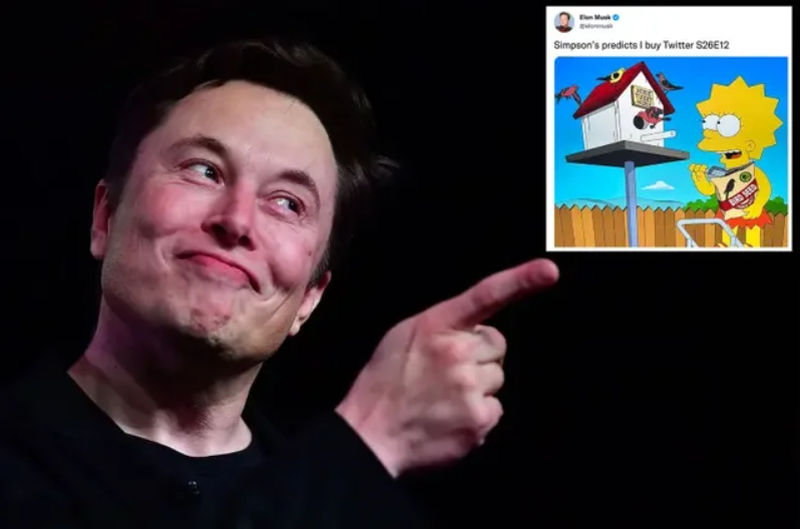 The Simpson series has "struck" again with the next prediction, and this time its protagonist, Elon Musk, has emphasized it.

According to the NYP, Musk noted in a tweet that a 2015 episode of the Fox animated sitcom apparently hinted at his takeover of Twitter.

The episode, titled "The Mouse That Fell to the Ground," begins by showing Lisa Simpson tending to a birdhouse with a sign that reads "Home Tweet Home." She is feeding baby birds when a bald eagle pecks and kills them.

As the eagle flies off into the distance, Musk arrives with his rocket. Fire from the plane burns the eagle, a longtime emblem of the US.

"Take care, family. We are about to meet a being of far greater intelligence than our own,” says Homer Simpson before directing Bart to grab his baseball bat.

Musk takes off his space helmet and identifies himself: "Hi, I'm Elon Musk."

Homer throws the bat at his head as Lisa screams, “Daddy, no! Elon Musk is probably the greatest living inventor.”

The camera pans to a new technologically advanced birdhouse that has attracted some birds.

"I think humanity wants its change once in a birdhouse," Lisa says as Musk refinishes his ship.

Fans of "The Simpsons" are also convinced that the show predicted England's miserable 0-0 World Cup 2022 draw with America that was played on Friday. In the 1997 episode "The Cartridge Family", the family watches a TV commercial for a match to determine "which nation is the greatest on Earth", but just seconds into the action, Homer is heard shouting "boring!"

A number of other predictions that eventually came true include Donald Trump's presidential run in 2024 and Germany lifting the World Cup in 2014.