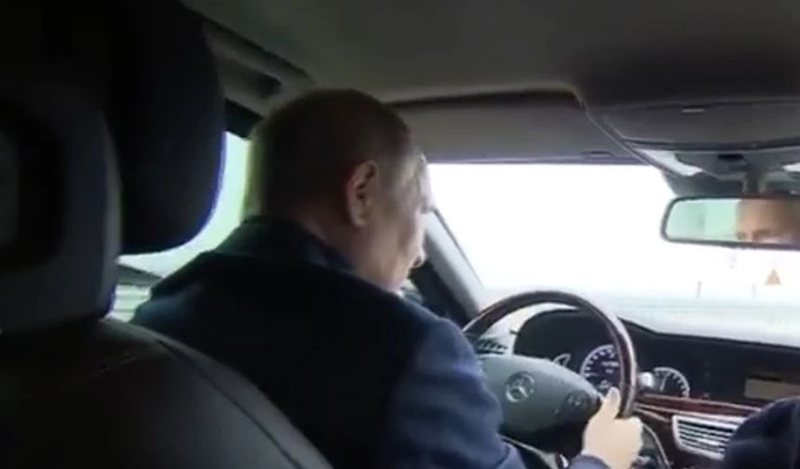 Vladimir Putin was in Crimea and traveled in a Mercedes to the bridge he built after the annexation of the region in 2014 and which was damaged by an explosion some time ago. According to foreign media, the bridge will be fully operational in a few months so that heavy vehicles can pass, but so far a part has been repaired and light vehicles can pass.

The Russian leader, wanting to show that everything is under control - the bridge is a resupply center for the Russian military - drove a Mercedes while talking to workers involved in the repairs. We recall that on October 8, a bomb exploded on the bridge connecting Crimea with Russia, and it is suspected that the Ukrainian secret services are responsible for this.

Russian intelligence services claimed responsibility for the security gap, while the Russian president signed a decree to take additional security measures in the region.

The Russian media are trying to pass it off as a "victory"????‍?? pic.twitter.com/l1NaVhe0wH

The United Arab Emirates comes to the aid of Turkey and Syria, you will not believe the staggering figure it donates

War balance from the devastating earthquake, over 5200 dead in Turkey and Syria

It was under the ruins of the earthquake in Turkey, this is the fate of the famous goalkeeper's wife. The last details are revealed

Exciting, everyone in tears! When you are a fighter from the start of life/ 2-month-old child is pulled alive after 29 hours from the ruins (Images that break the web)

Terrifying video that breaks your heart/ Footage of a girl under the ruins, holding a small child in her hands: Why aren't they coming, I can't anymore! The baby is not crying anymore

The earthquake in Turkey remains dramatic/ Tragic story, a women's volleyball team disappeared under the rubble...

The apocalyptic earthquake in Turkey and Syria/ The balance deepens, the number of people who have lost their lives reaches alarming figures

Luizi no longer knows "limits", he even broke the last "record" held by Donald Veshaj