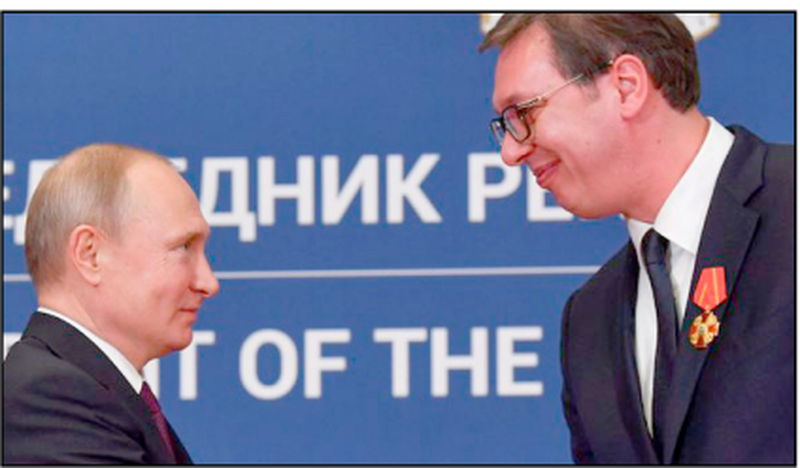 The non-peaceful situation between Kosovo and Serbia has caused many reactions from both sides. The statements of the leaders of these two countries were strong, as they stung and provoked each other. A few days ago, Albin Kurti called Aleksandër Vucic a "little Putin" who intends to commit aggression in the Balkans. Meanwhile, the president of Serbia, Aleksandar Vu?i?, has reacted for the first time regarding this, saying that he was insulted. The Serbian president rejected the Kosovo prime minister's accusations, saying that Kurti is trying to be a little Zelensky fighting against little Putin.

The American newspaper "New York Times" interviewed the Serbian president Aleksandër Vucic after the tensions of July 31 in the north of Kosovo, where he received his answer regarding everything that Kurti said. When 'NYT' asked Vu?i? about the nickname given to him by Kosovo Prime Minister Albin Kurti, he said: "I am 2 meters tall, Putin is shorter, even though Putin's real height is a sensitive topic for the Kremlin ", answered Vucic. "Kurti wants to be a 'little Zelenski' fighting 'little Putin,'" Vucic added, saying that Kurti wants to make Vucic look like "a terrible nationalist who wants to fight against everyone." Regarding the pressure from Russia, Vu?i? has openly admitted: "We are stuck and we know it".

The conversation between the US ambassador to Serbia and Vucic

The New York Times also spoke with the representative of the US diplomatic mission in Serbia, Christopher Hill, who confessed what he told the Serbian president on the day of the tensions about the license plates. Hill himself says that he does not consider it possible to launch a war, but Vucic had told him that "this would be the first time that a war would be triggered by license plates". "Wars have started for territory, money, even for a beautiful woman. But this would be the first time ever that a war would start over license plates", said Vucic. Ambassador Hill, whose appointment signaled Washington's heightened anxiety about the Balkans, said Russia, which offers only "economic blackmail" and "chaos throughout the region," has found few supporters. Despite Russia's influence in Serbia's energy sector and despite its widespread efforts to misinform here, Serbs have decided that their future lies with Europe and the West," said Hill. The Times writes in its article that "Ministry The Russian foreign ministry added fuel to the Kosovo fire by accusing the Albanians of being "radicals" who are trying to expel the ethnic Serbs and cause riots, to start a violent scenario. The president of Russia himself has repeatedly used NATO's support for the separation of Kosovo from Serbia in 1999 as a justification for Russian aggression against Ukraine. VukVuksanovi?, a researcher and international relations expert from Belgrade, told the New York Times that Kosovo is the perfect cheap investment for Russia. He added that Russia's ability to do evil in the Balkans is severely limited by the war in Ukraine. "Now Russia can do less. His abilities are more limited and he is more isolated. Its resources are concentrated, but Serbia's refusal to implement sanctions has given ammunition to those who see Mr Vucic as a Russian puppet. Noting that Serbia "remains the only country in Europe that refuses to sanction Russia," he said. Meanwhile, during the interview, Vucic reiterated once again that he will not impose sanctions on the Russian Federation, at least not until membership in the EU. Tensions between Kosovo and Serbia reignited after the events in the north of Kosovo on August 31, where local Serbs set up barricades, blocking the roads leading to the border points with Serbia, in Jarinje and Bernjak. and also attacked the police. They were triggered by the agreement on the reciprocity of license plates that was supposed to enter into force on August 1. Since 2011, Kosovo and Serbia have been holding talks with the mediation of the EU. Kosovo insists that the dialogue should include mutual recognition, while Serbia seeks a compromise solution. The next meeting will take place on August 18 in Brussels.

Photo/ Serious incident, the plane with 63 passengers was shot at while trying to land in the city