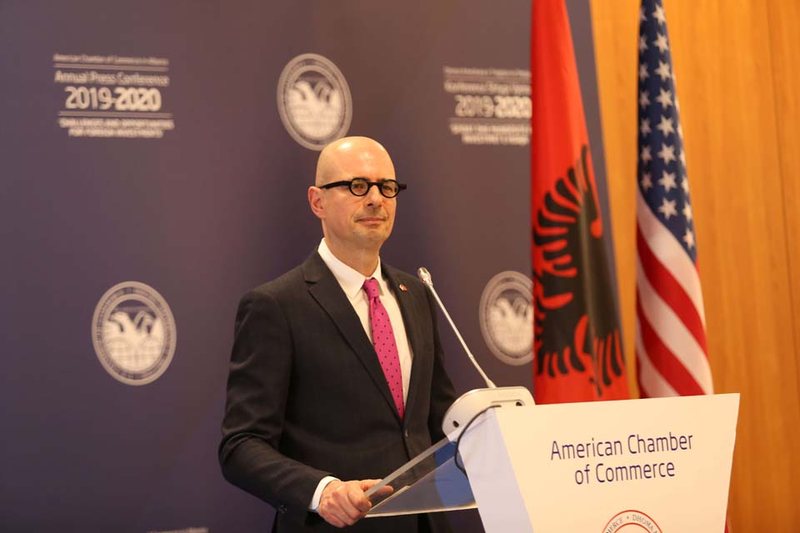 Adopt anti-bribery law, there are serious violations with public procurement

The head of the American Chamber of Commerce, Enio Jaço, further emphasized, among other things, that in 2021, there has been an increase in American investments by 62 million euros. He announced that US investments in the region are led by Serbia and Northern Macedonia. Focusing on the effects of the crisis as a result of the war in Ukraine, Jaço added that in the last 4 years, there has been a decline in the confidence of businesses in the economic field. "In the last 4 years, the confidence of businesses in the economic field has decreased. "Albania is in charge of improving the climate," he said. Jaço also said that they have submitted to the government the Investment Agenda with 40 legal interventions. "Technical breakdown, the sharpest part of the process. To create an improved structure for attracting investments ", he said. Jaço said parliament should pass anti-bribery law, where senior and middle officials are involved. He said there are serious violations in public procurement. "We propose the approval in Parliament of an anti-corruption package, this package aims to prevent corruption in the legislative bodies that have a retroactive character. In the conditions of Albania, we must be as conservative as possible, we have had obvious violations, corruption cases, we must be as conservative as possible and not liberal for procurement standards ", stressed Jaço.

Meanwhile, Mr. Enio Jaço has given 8 recommendations of the American Chamber for the improvement of the business climate, starting from the approval of the anti-corruption package to the public procurement procedures and the efforts to avoid money laundering.

1. First structure to attract foreign investment, whoever attracts foreign investment has great benefits in the economy. Investments bring income, employment, investment in technology. Must have transparent investment strategies who are the priority. We think that there should be shortened procedures regarding investments, regarding construction permits. The best example is Northern Macedonia and Serbia which are focused on simple and short procedures. The opposite happens in Albania. There should be clear investment initiatives. There is a decrease in market concentration and a decrease in monopoly in some sectors.

2. Secondly, we demand the approval of an anti-corruption package in the Assembly. This aims to prevent corruption and is complementary to the legislature. We propose the adoption of anti-bribery legislation. Closely related to anti-corruption is reform. With the maximum elimination of exceptional cases, we think that in the conditions of Albania we should be as conservative as possible because we have had obvious cases of violations. We demand a reformatted public procurement system. There should be as few exceptional cases as possible that bypass standard public procurement procedures.

3. Activation of civil society is needed. We have probably one of the best public consultation laws but the problem is that it is not implemented properly. We recommend a number of instruments aimed at proper law enforcement. The better it works, the more public confidence increases.

4. Fifth, the tax system must comply with international standards. The tax system is important for businesses. Our principles are accounting standards. It has to be predictable which means businesses need to do their planning. If the laws change every year, it's hard to predict. The best countries change the law no more often than once every 4 years.

6. Sixth, 7th and 8th are stimulating for the economy. All 6 are related to the creation of spaces for Albanian exports. There are even more opportunities to further expand exports and the diaspora can play a very important role.

7. Se 7 needs more attention to the digital economy to further stimulate it. The first is the electronic signature to be used en masse. Much work needs to be done to combat money laundering. Albania for years in the gray list of Moneyval.

8. Professional capacity for the workforce should be increased. It is a global problem but it needs to be solved. Public and private sector cooperation is needed to stop people leaving the country.

8 American Chamber recommendations to the Government

2. Approval of the anti-corruption package

6. Review the draft on income tax

7. Creation of spaces for Albanian exports