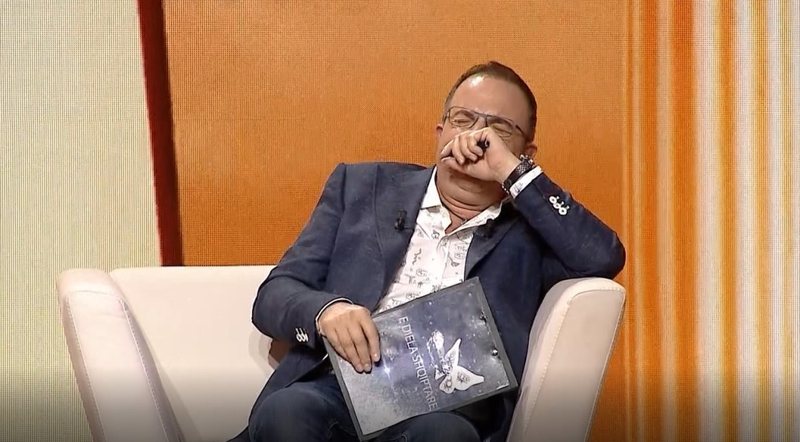 Kliton and Hairi were to solve an issue that has plagued them for about 7 years. Hairi is the grandfather of Clayton's bride, who sold him a plot of land for 10 thousand Euros.

Hairi got this money but Kliton has neither the land nor the money. The land has come up with problems and Hairi has sold it despite these problems.

Kliton asks for his money and rightly so, but Hairi says that he has eaten all the money and has nothing to give him, he even says to forget that money.

In the end Arditi does not restrain himself and bursts out laughing. "I apologize endlessly. I apologize to you, it has not happened to me in the 9 years we have been together," Gjebrea said.

Excerpts from the show on TV Klan

Eni Çobani: Why did you take 10 thousand Euros? You at least got the halves, how did you get them all?

Hairi: Why did I take it all? Yes he had money, without giving it to me. You had money because you worked, Germany had it. You had asked me, you to tell me na

Eni Çobani: Wow, how did you owe it?

Hairi: You are not ashamed to bring me here my 77 year old husband with grandchildren, nieces and nephews and bring me here. For what brings me here to make me faint, I have diabetes. Let it be.

Klitoni: If you are a cheater, you lied to your niece, then me.

Moderator Ardit Gjebrea during the debate did not even hold a laugh for the way Hairi was talking and apologizes to the public because such a thing has not happened for 9 years in "See you in court".

Ardit Gjebrea: I apologize endlessly. I apologize, it has not happened to me in the 9 years we have been together.