Florjan Binaj has a sudden incident while he was on a live broadcast on Top Channel, the actor is embarrassed in front of everyone 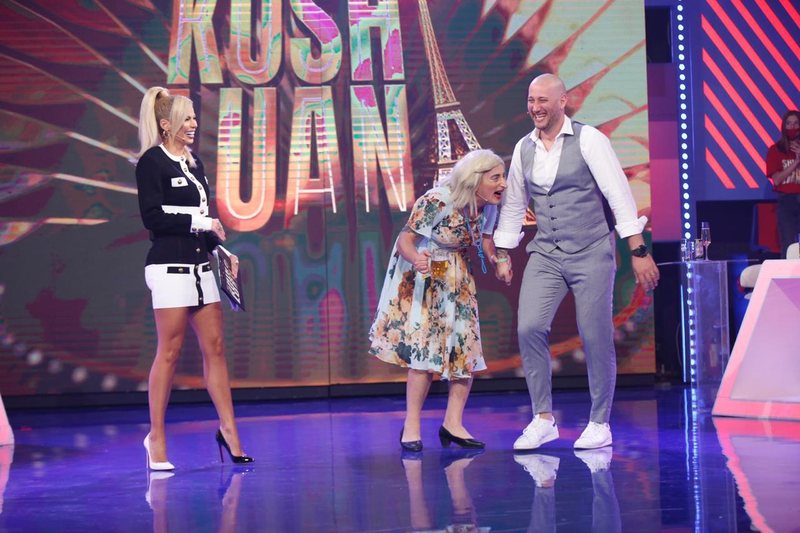 During the game called 'Gongu', Burbuqja, a character played by Rezart Veleshnja, challenged the actor Florjan Binaj to throw his puppet through the gym balls to catch the handkerchief.

Flori accepted the challenge, but apparently he did not expect the story to turn back.

At the moment he was executing this game, Binaj tore his pants again this year, causing a lot of laughter from the guests and the audience.

The famous Turkish actor lifts the hearts of all Albanians, wishes in Albanian the Independence Day (PHOTO)

"If she hadn't called me every 30 minutes ...", the well-known Albanian moderator shows the crazy scenes of jealousy with her husband, you will not believe what she was doing

The world-famous Albanian singer held the long-awaited concert that amazed everyone, she reacted excitedly: Blood, sweat, tanning, but most importantly, all the love of the world is ...

Renato Mekolli gets engaged, reveals for the first time the portrait of the partner who stole his heart, the chef is seen sitting on his knees in front of the beauty

"Father's son came to Adem Jashari's birthday" / The famous Albanian singer becomes a father for the first time, attracts attention with the special name he gave to his son

Albanian rapper, Arian Gushi, known by all by the stage name Gold Ag, has given ...

What have they planned? A big surprise is coming from Albani and Arilena

Arilena Ara and Alban Skënderaj have not had any new artistic feeds these d...

"I was sentenced to 1 year in prison", singer Mihrije Braha recounts for the first time the difficult moment of her life

Singer Mihrije Braha, recently invited to the column '5 dates' in Prive, has nar...

"How the doctor spied on me when I went to have an abortion", the well-known Albanian moderator leaves everyone speechless with what she tells

Moderator Gerta Gixhari, who is the sister of actress Olta Gixhari, surprised ...

Another hassle happened tonight at "Hell's Kitchen". Two of the competitors, Joa...

Facing loud tones in the studio, Ana and Fatjoni "count" all in each other's eyes

Finally, after her request, Ana confronted Fatjon to tell her everything she c...