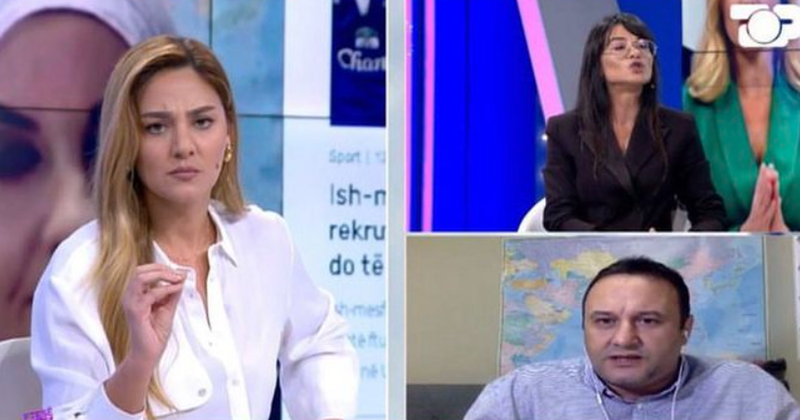 Yesterday's punta on the show 'Invitation to 5' was full of insults. In the studio, the proposals of lawyer Migena Balla for the discourse on polygamy in Albania were being discussed. Blogger and journalist Zhaklni Lekatari and historian Olsi Jazexhi argued with each other, leading the confrontation to personal insults.

'You were a good girl, you would have been a good woman in Kosovo, you broke up, you came here to open a sex blog. She's an ignorant piece of shit who has a sex blog. Go get married, go find a man there, K***'- said Jazexhi, who addressed the moderator: She insulted me, called me anti-Albanian.

"The devil has entered your belly, you need to go to a hojj with him, they will take you out as a pornographic actress in shows" - Jazexhi says, not stopping and continuing: Yes, I wanted to take out all of Zhaklina's lovers. ...

Regarding the event, Bieta also reacted on her Instagram, in which she states that she was forced to make the choice she made, based on the fact that she considers the use of personal insults, blows below the belt and public lynching of the characters she invites to be intolerable. in the show, as he also condemns Jazexhi's words, considering them as "moral police".

Is the soap opera back? Amber Heard makes the unexpected decision, what is expected to happen with Johnny Depp

A fierce debate broke out in the show between the guests, the moderator "doesn't hold back": the wife has you too... (Video)

Today, the mother of two children, can you find out who this well-known Albanian singer is (PHOTO)

How old did he turn? Announcer Ola Bruko celebrates her birthday, she is extremely excited by her daughter's congratulations (PHOTO)

"He is the one who...", the Albanian artist confesses racism in Switzerland: I was scared, I realized that I am a...

"Pusta, decay, my history reminds them...", Ronela Hayati does not hold back and explodes badly at critics (PHOTO)

The singer Ronela Hayati has recently reacted harshly to all the criticisms dire...

The robbery of Rezart Veleshnja, the actor reacts in high tones: It's a fraud, because I went crazy

In recent days, the news has circulated that the actor of Orange Rezart Veleshnj...

Anxhelina Hadërgjonaj celebrates her birthday today and there was no way ...

It has nothing to do with ballet! Klaudia Pepa gives the great news: You can't understand my happiness!

The Albanian ballerina famous in Italy, Klaudia Pepa has won an award at the Bes...

"I am a Nazi, Hitler had values", the shocking statement of the world-famous singer, is immediately punished by...

Rapper Kanye West has praised Adolf Hitler and said people should not criticize ...

The trailer for the new Prince Harry and Meghan Markle documentary series has be...