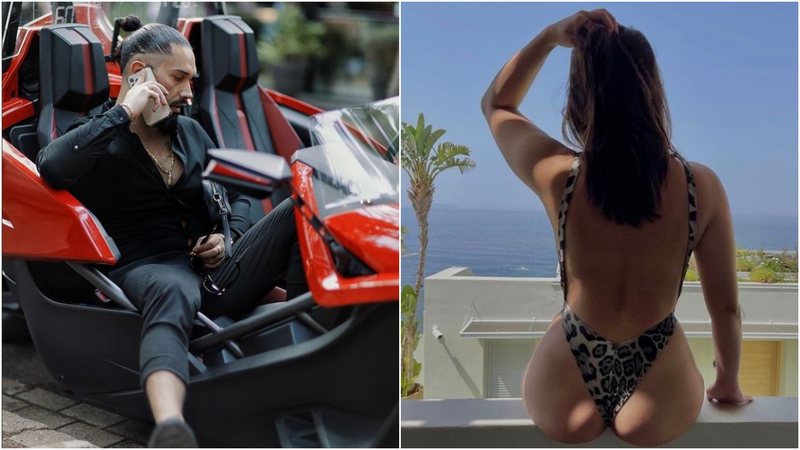 A photo of the former competitor of "Për'puthen", Atdhe Xharavina went viral on the network this week. The boy from Kosovo appeared in a nightclub "kissing" a blonde.

Invited today to "Goca and Women", Atdheu showed how the truth of this image stands and revealed whether it is in a love relationship or not.

"It is not true, I continue to be single. That girl works at the club where I am and we have been talking about some tables. "They approached me and they took the photo like that and it looks like we kissed", - said Atdheu.

Meanwhile, one of the moderators of the program, Krista Merkoçi, said that she sees the Homeland as that "typical Albanian boy", because she has such a picture. This statement prompted comments from other girls, who asked Homeland if it would go out with Krista to get to know her.

The former contestant said that Krista likes her appearance and therefore would like to go out with her because they are not known.

Atdheu: Krista did not say any fact that I look like a typical Albanian man, but she said maybe.

Krista: Yes because I do not know you.

Homeland: I am fixed as Krista said, I am a very gentleman, I make some gifts, but I do not teach my girlfriend to be materialistic.

Fatma: Has the relationship with the oysters changed after your fame?

Fatma: It's not just beautiful believe me. Are we in for a four minute meeting?

Homeland: First, I see it in appearance, then when I get to know it better, we talk about other things. It’s beautiful, I would certainly admit.

Krista: You embarrassed us today!

With a swimsuit and heels, the Albanian singer challenges the weather in the snow

The well-known Albanian moderator admits that she is in a relationship, who is the boy who stole her heart

From butcher to model, Beniada shows the sacrifices of her life: I was 16 when I first started working

See what is happening to Donald after the release of Beatrix, Ermal Fejzullahu releases video that is breaking the network

Del VIDEOJA! Olsa and Perputhen once found Big Brother VIP's "beloved" Angel and can not guess who is the most famous character

While the author of "Perputhen" Olsa Muhameti was a journalist and during an int...

Beatrix came out of the house of 'Big Brother VIP', Iliri surprises everyone with what he says about the singer: From morning to dinner he ...

The departure from the 'Big Brother VIP' of the singer Beatrix Ramosaj has been ...

"Arbana has fulfilled her wish" / Beniada's mother and grandmother tell what the neighbors say about the model: They call me ...

Beniada's mother and grandmother commented on the model's journey on Big Brother...

"She can do whatever she wants" / Beatrixa in a serious psychological state, Neda Balluku confesses what she faced when she left the house of 'Big Brother'

Former resident of "Big Brother", Neda Balluku, was today invited to the show "B...

"He is like Don Juan" / Donald throws the 'hook' to the famous moderator after Beatrix's departure, the former resident of 'Big Brother' cracks the strong statement: Girls look like Brad Pitt!

The secrets of the residents of 'Big Brother VIP' are expected to come to light, an envelope arrives at home, everyone is confronted with the unexpected

"Big Brother" asks the residents to go one by one to the story room and tell a s...