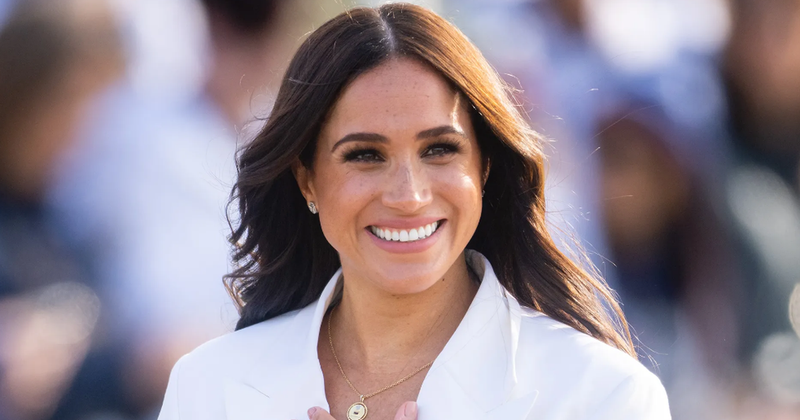 Duchess of Sussex Meghan Markle recently attended an event for the 'Women's Fund of Central Indiana' where she appeared wearing a green dress with purple heels. But her dress had a hidden meaning. Dressed in a Giorgio Armani dress, the 41-year-old participated in a discussion titled "The Power of Women: An Evening with Meghan, Duchess of Sussex."

Markle, who experienced major threats in the United Kingdom, according to recent reports gave even more attention to the topic of discussion with the Logan Hollowell emerald pendant that she had previously put on. Besides representing one of the colors of women's rights, the stone represents intellect, communication, decision-making and promotes truthfulness and honesty, looking past the surface.

Meghan Markle has faced criticism for her clothing style many times, but she has also received a lot of praise from fans, critics and fashion connoisseurs. Whether or not Markle happens to choose a specific outfit from a well-known brand, it's a given that it won't be around for long. However, when it comes to choosing colors, the Duchess of Sussex has typically worn a variety of different shades since joining the royal family and even after leaving it, but there is one color that Markle refuses to wear in public.

Kiara got jealous? "We did a mega performance", Luizi talks about massage, spa and phone calls: We won, I and Tea will give them.../ The moderator's immediate reaction comes (VIDEO)

Kiara-Luiz or Bora-Donald-Beatrix, it is revealed which of the stories is holding the "throne"

"I don't sleep at all"/ Diola and Johni talk while hugging: To peel you... (VIDEO)

Kiss on the lips between two residents in Big Brother, the viral images are spreading rapidly on the network (VIDEO)

The first kiss between the two residents of Big Brother happened. Thousands...

'You are neither the first nor the last to...', Kiara 'shocks' Luiz and gives him the most 'bitter' message (Video)

Luiz Ejlli and Kiara Tito talk from time to time late at night, where there are ...

"If he comes..."/ Luizi is afraid of the entrance of Kiara's ex-boyfriend, Bjordi makes a mistake: Who is Ylli Baka

This morning Luizi was telling Bjordi the biggest fear he has inside the Big Bro...

"Shame is eaten with bread", Ardit Çuni reveals the serious incident that happened to him before the final of "DWTS" (Video)

The singer Ardit Çuni has shared with his followers on "TikTok", a "scary...

After the 'earthquake' caused by the publication of the book, it is revealed what will happen to Prince Harry

He is one of the people who has conquered the foreign media in the last period. ...

Who's turn? This is how Diola would react if he is eliminated from the BBV house?! (VIDEO)