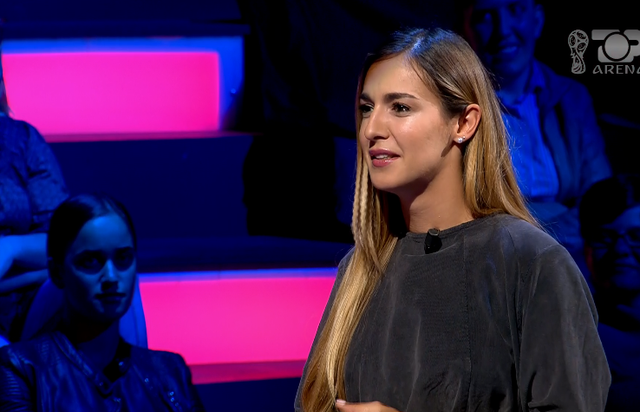 The well-known moderator of Top Channel and at the same time the candidate for deputy of the Democratic Party was rumored, Ori Nebijaj, it was rumored in the media that she is pregnant.

The allusions started from some photos of the moderator where her belly looked round. Today on the show "Wake Up", together with Isli Islami, Ori has decided to react to this news in the funniest way possible.

"They had found pictures of me only with details to make it look like there is something there. Do you think I should stand up? ”Says the presenter. As babies cry in the background, Ori shows her belly where in fact it is clear that she is not in sweet anticipation. Of course, not a single joke from Isli was missing. For more see the video:

"What does a person want more from life", the well-known moderator of Top Channel 'sets fire' to the network, explodes in a bikini (PHOTO)

I have a bad relationship between Bora Zemani and Donald Veshaj after their separation, the actor responds harshly to the 'thumbs' of the moderator: A job is required for ... (PHOTO)

Art in mourning / The 45-year-old famous actor is found dead in his house, friends tear the net with their dedications: Talented and loving man! (PHOTO)

"Si beastë je" / The well-known moderator of 'Top Channel' sets the network on fire with the photo with the bikini, the fans 'go crazy' after her

'We will miss you very much' / More than 5 decades with guitar in hand, the iconic bass player of the famous music group dies

Fjolla Morina is arrested, her husband reacts for the first time, here is the powerful message he sends to the singer from the cell

Fjolla Morina's husband, Fisnik Syla, has broken the silence after the Basic C...

Well-known moderator Ardit Gjebrea together with his wife and daughter have tr...

The millionaire surgeon is shocked, reveals the double life of his partner, the famous former Miss: She worked as a high-class prostitute

Ledri Vula rarely talks about his private life, reveals how many years he has been in a relationship with Sarah: How I found out that she was 'the one'

Ledri Vula was invited today on the radio show "Pardon My French", in which he s...

'They act like super VIPs. I'm very sorry ', the daughter of the former MP and the Albanian blogger did not leave anything unsaid about them, Graciano and Argjira react

Ada Deda, the daughter of the former PD MP, Albina Deda, and the Albanian blogge...

"It still bothers me", the heiress of Top Channel shows her biggest phobia that can not be overcome

The heiress of Top Channel, Lori Hoxha spoke, among other things, about the fear...