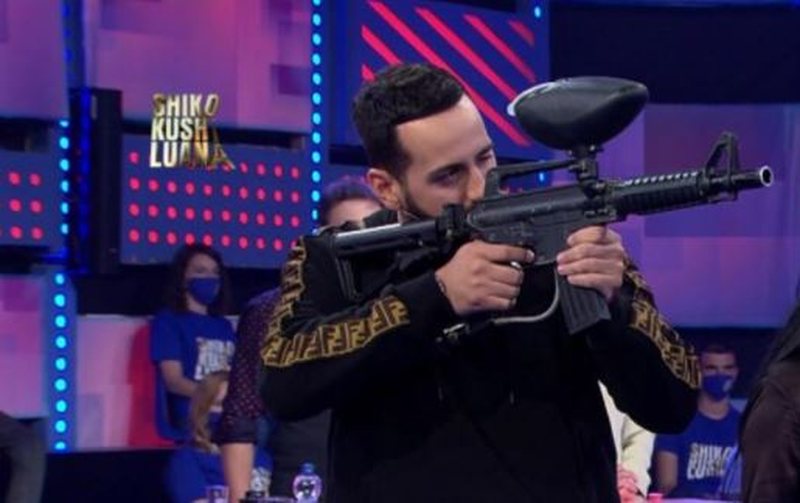 In this episode of "Shiko Kush LUAN" the guest of the moderator and author Luana Vjollca was also Capital T, who could not escape the "Paintball" challenge.

Given that a large part of the names on the chart were artists with whom Ademi has collaborated over the years, there was no way to miss the question with which artist Capital T thinks he had his worst collaboration. To this question, he did not hesitate to answer by hitting him, and admitted to us for "Shiko Kush LUAN" that his worst collaboration has been with the singer Eni Koçi.

On the other hand, in another question, which had to do with the name of the least talented artist from the table, Ademi again selected the name of the singer Koçi by hitting for the second time in her photo.

But it did not stop there, in another question which was: "Which artist's songs would you never listen to?" Capital T redistributed for the third time the photo of Eni Koçi.

We do not yet know if there is a hatred between the duo, but we received three honest answers from Capital T.

'Give me a kiss on the lips', the famous character on TV Klan makes the move that surprised Silvana

He made a fuss on Top Channel after the two competitors got into a fight for the same man, Fationi is matched as an exemplary "father", he is photographed with the "mysterious" girl and the little one

Albanians have been nailed in front of the screen for years, can you guess how old the famous actor Luftar Paja turns today?

There were thousands of followers on Instagram where he advertised numerous trips and seductive photos / The 26-year-old is found dead in mysterious circumstances. What do the Police suspect?

Sitting on the lap of a 26-year-old man, Madonna knows no age, drives the network crazy with the published photo

"I chose this for a bouquet ..." / His wife celebrates her birthday today, Agron Llakaj makes a sweet dedication and posts a special photo: We will drink toast of love and let us get drunk

The quarrel heats up on 'Top Channel' / Shqipja came out in defense of Cindy after the revolted clash on the show, Melissa's harsh reaction comes: Yes, the candle goes out!

A strong quarrel broke out yesterday in 'Match' between Melissa and Cindy. Du...

Ledri Vula and Capital T refused to cooperate, Fifi reveals the reason why

"I passed Covid-19" / They criticize her for not respecting the distance, the moderator Dojna Mema surprises everyone with her answer (REPLICATIONS)

Unlike any other time, this year the concert on the occasion of 'White Night' ...

Do you prepare coffee for your partner? The mornings of Alban and Çiljeta, the famous goalkeeper rarely talks about his relationship with the singer: I wake up early and go to…

Invited to the morning show on 'Wake Up' on Top Channel, today was the famous ...

"It is enough to post a product from a company and the numbers continue to add zeros" / Instagram a "bank" for VIPs, surprises the famous Albanian actress: Albanians earn 2000 € per post

The latest trend where all the celebrities have turned their eyes to gain fat in...

Made the eagle in the beauty contest, the producer reveals what "gifts" Miss Serbia received after this action

The beauty contest "Miss Freedom of the World", which was held in Kosovo a yea...

Prime Charter and international conspiracy for ...