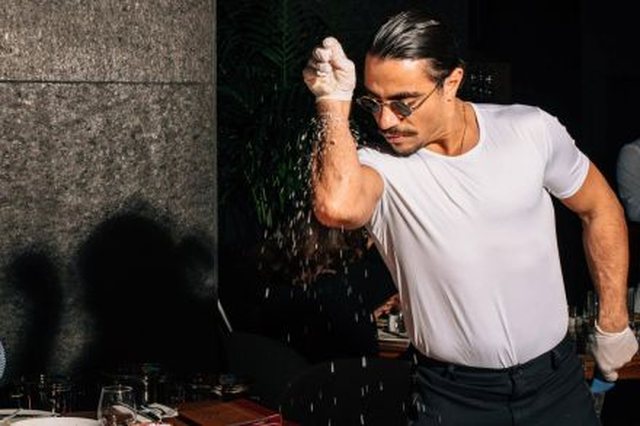 It is learned that the famous chef, Nusret Gokçe, is currently enjoying his stay in our country. As it is known from reliable sources for the magazine 'Bordeaux', he is staying in the city of Korça.

"Although the reasons or the people behind Nusret's arrival in our country are not disclosed, the same sources suggest that the famous chef last night was accommodated in one of the well-known hotels in the city of Korça, which was closed to ordinary customers ", it is said in the magazine 'Bordeaux'.

Meanwhile, on the social network instagram of the chef 'salt bae', there is no sign that he is in Albania.

Nusret Gökçe, nicknamed Salt Bae, is known for the way salt is thrown. He is a Turkish butcher, chef and restorer, who owns Nusr-Et, as well as a chain of luxury homes.
He and his restaurant became quite famous in Albania after some of the ministers of our country had dinner there. This became known when the staff of the famous chef in one of the most luxurious restaurants in Dubai published the video where the Albanian ministers were sitting together at one of the tables.

Nusret Restaurant in Dubai is famous for the way it is served and the presence of one of the well-known chefs on social networks. The restaurant menu has prices starting from 400 dollars for a portion of 500 grams of meat, was exactly why it caused so much fuss in the Albanian media.

Do you remember Zhaden who kept the Albanians stuck behind the screen? You will not believe how beautiful she looks now, she has become the mother of two twins

Giovanna Antonelli is one of the most beautiful and talented actresses from Br...

Powerful Vali Corleone arrested / Dozens of police officers landed to raid the house, the chief prosecutor tells what was found in his apartment, from cocaine, weapons, bullets to ...

Yesterday it became possible to arrest a well-known public figure from Kosovo. V...

Always beautiful and sexy, you can not imagine how old Fjolla Morina is! Surprised by husband and daughter

Fjolla Morina celebrates her 42nd birthday today and congratulations for her hav...

"Thashë uau" / Vlashenti tells for the first time how he fell in love with the well-known moderator of Top Channel. Here is the exciting story

Vlashent Sata was recently invited to Top Albania Radio to comment on the song "...

Related to Education? Ana surprises everyone with her statement

In recent days, it has been rumored on the network that Ana and Arsimi have st...