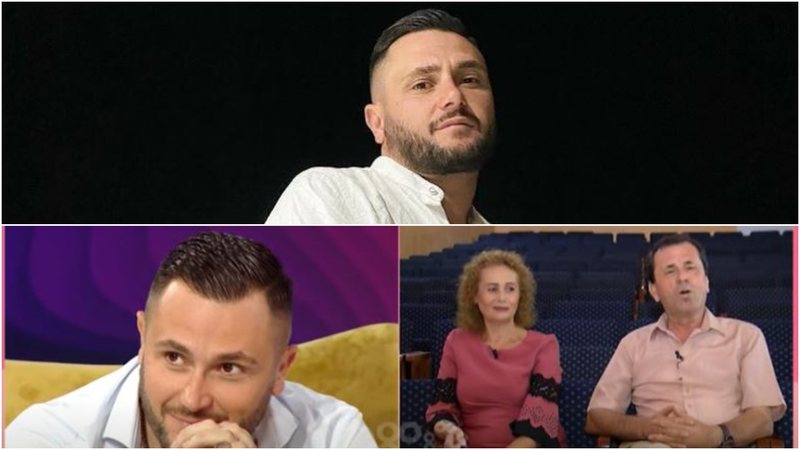 Bes Kallaku's mother and father spoke for the first time about the beginnings of their son's career as an actor. While they were invited to "Live with the Hour", the singer's father said that as a teacher, he had never thought that his son would take this direction in life. He had other desires for Bes's professional life.

" You know very well that I wanted you to continue in natural sciences and technical sciences, but your performances, which I always follow very carefully, convinced me that you have to solve it yourself, " he confessed. father of humorist.

Meanwhile, Kallaku's mother decided to share with the whole public a special memory of him, from the beginning of his son's career as an actor.

" I will never forget where there was a suit in my wardrobe, which I had as my favorite and you got it. Meanwhile, when you (Besi) brought it home, the suit was torn and I after a long time, when I decided to wear it, found it torn in the wardrobe. "And I did not find the moment to hold you accountable, for the pleasure you had given me on stage, " she said with a laugh.

Meanwhile, last week, Besi said that he thought of leaving Albania, because once a priest had told him "that this country has been blessed by God, but the slave does not love him"!

" Like me, like Jona, we thought about leaving. Too sad for someone who has a consolidated career to consider leaving. After all, sometimes make people leave your country. "A priest told me this place has been blessed by God, but the slave does not love it ," said the comedian.

Asked about the fact that he has put wealth, Besi stressed that the greatest wealth is his family and that he will leave only a good name to his child.

" During the time I have to write the scripts of 'Kosherja', I stay up until two or three in the morning writing. In addition to my scripts, I also have the numbers I do for it. I wake up early in the morning, do fitness and start working again with everything in front of me. There are people with full pockets, but with empty hearts .. for me my greatest asset is family. Everything else is temporary. "The only thing I will allow my child is my good name and my good deeds, " he said.

"I love you, but as a sister" / Granit's statement takes the singer to the hospital, the ambulance is called for Fifi, the whole conversation turns white: Open your arm, you have a block. I will not forget what you did to me… (Full BESEDA)