"Deny if you want", Arbri brings out the rumors Ana: You asked me to… 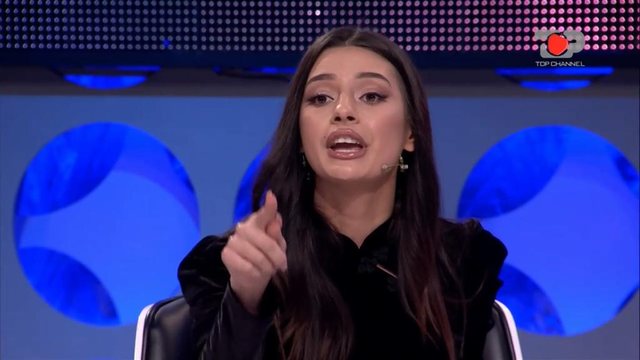 Anna's 4 minute meeting with Edison one of the young men in Perputhen sparked debate in the studio.

Ana said the meeting left her with good taste and Edison is one of the more mature guys who has had dating at least in terms of age.

Mentioning age, Mevlani was the first to react, saying that girls always reject the "old" whenever the young come.

The debate culminated later with the statement of Arbri who had previously had two meetings with Ana, when he said that Ana proposed to him to leave the show as a couple.

Ana -Mevlanit: I always throw pins, let me talk for hours. Here is that you are Mevlan age and do not know how to behave
Arbri: You think that maturity is related to
Mevlan age : I have this
Ana for miles : why do you grind in vain.
Arbri: Do not expect me to have reaction from me, you are arrogant excessive self-esteem. I have no interest in you if you behave here. You told me why you are not jealous, and that's why I do not care. You are arrogant
You are one of those girls who have accused Andi of hypocrisy but you are yourself.
Ana: well done
Arbri: When we were at 'Shiko Kush Luan' you asked me to leave you as a couple. Deny if you wanted
Ana: I'm sure I told you this, be ashamed to say this, just because I did not choose you
Arbri: at the lion when we are dancing, you told me something, deny if you wanted.
Ana: That I accept one thing that I said.
Arbri: You wanted to use me. I accompanied him and drove home and he told me I want to go out with you couple
Ana: This Bora is shameless. When men do not get what they want. I told Arbri that we have chemistry together, but when I left him without appointments I saw that I had no reaction from him.

Arbri; You are not on my list, you are not what I deserve