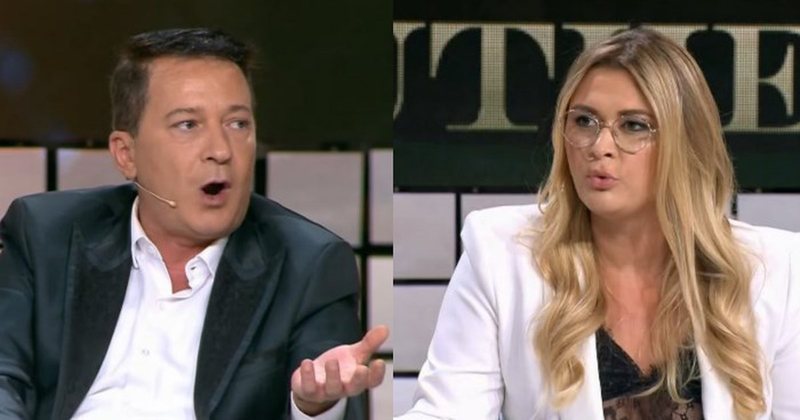 A strong debate between two commentators of "Purputhen" took place in the new episode of the show. The reason was an expression that Arjani used towards Angela, who asks that Arbri not see the other girls. Arjani said that Angela may have emotional problems, but Neda intervened saying that the use of such a term is wrong.

Arjani: Either Angela has lost her love for Arbri, or she has emotional problems with herself. There are fluctuations that cause mood swings that reflect here in the studio as well. Either you know things that we don't, or you've lost your liking for Arbri or you have problems that maybe you don't understand, but we do.

Neda: There is a very big anomaly going on in this studio and I am very sorry. We are attacking Angela with this typical Albanian thing that when a girl has the courage to come out and say 'I feel this way, it doesn't make sense to you, but it makes sense to me', we will accuse her of having mental instability. This is a great shame.

Neda: You said you have problems with your emotional self, what does that mean?

Arjani: I don't want to explain it to you, nor is it the place to explain these things.

Neda: Arjan, I don't know what's wrong with you these days

Arjani: No, I don't have anything, but you are accusing me

Neda: I speak my mind

Neda: Is this your problem, Arjan? Do you really have this problem?

Arjani: Say your opinion in opposition and completely disagree with me...

Neda: I didn't write a contract to think things like you

Arjani: Don't give opinions on what I'm saying

Arjani: Because it doesn't belong to you and I won't allow it! And don't distort the words I say.

Neda addresses Angela: Having problems with your emotional self is one thing you can't tell someone. If what you feel makes sense to you, it's a big deal if others don't. Therefore, this show is made to develop all the details.

Arjani intervenes: This started with theories, I'm waiting for you, we've been doing the show here for 4 years. You are telling us!