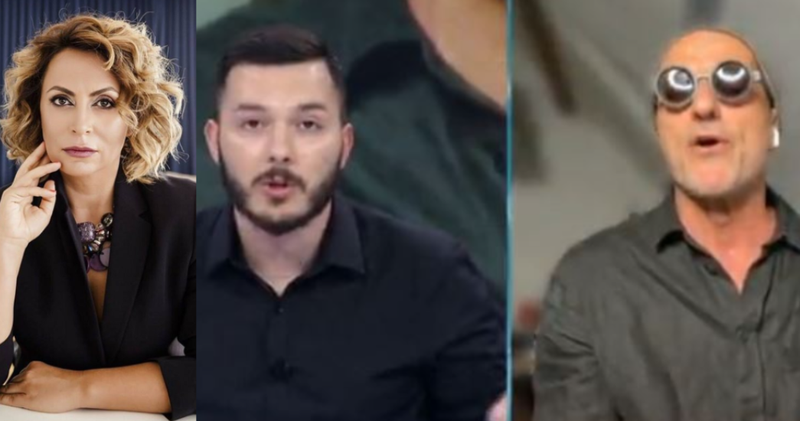 A fierce debate took place last night on the show 'Open' between the artist Robert Aliaj and the singer Ardit Çuni regarding the song of Albania participating in 'Eurovision'.

Ardit Çuni was part of the Albanian delegation in Turin, where the festival was held.

Çuni said that everyone has been contested for the victories in the "Song Festival", mentioning Rona Nishliu. Aliaj said that he never criticized Nishliu, whom he called a "diva", while adding that Albania had an unworthy appearance in the "Eurovision" that he left behind.

After a heated debate with Robert Aliaj, Ardit Çuni left the show.

Part of the debate:

Ardit Çuni: He is the product of the work of an entire team and I do not allow anyone but you to offend a product that I and many others have sweated. So far, I do not allow it to offend.

Robert Aliaj: I am sorry that such unformed people come to this panel and create such a low debate at the level of that performance. I'm going to have a coffee now that…

Ardit Çuni: I am leaving.

Eni Vasili: He also leaves at the same time. Berti please do not leave, Çuni left, so we leave him with a departure.

Robert Aliaj: Do not talk like shit, leave these conversations. Rona Nishliu was a diva, because I never cursed. There were others. Rona shone a lot, remained in the memory of many places. In that final Rona Nishliu was mentioned as an image. The speakers also mentioned it. I felt normal. The situation is not personal. It's more to me a frustration coming from a 30-year transition. Nothing is done there without the participation of politics. Not to mention that this song was not contested when it was declared the winner. I would not want a festival like Magic Song to get this.

Ardit Çuni: Congratulations on the scandals he causes on the televisions he participates in.

Robert Aliaj: I do not know you at all.

Ardit Çuni: I see you only commenting and the festival as the Magic Song. Congratulations on insulting a concert that you yourself attend. Some of the singers have come out of the Magic Song.

Robert Aliaj: Let's talk… I do not want to deal with anonymous people. We have no culture of debate.

Ardit Çuni: I do not know what Mr. Aliaj is talking about. There are officials and titles in this delegation.

The delegation is led by RTSH. I am the media director in this case. Directors are part of the control of the thing.