Chicken Ali Pasha, the old secret recipe, sure your whole family will lick your fingers 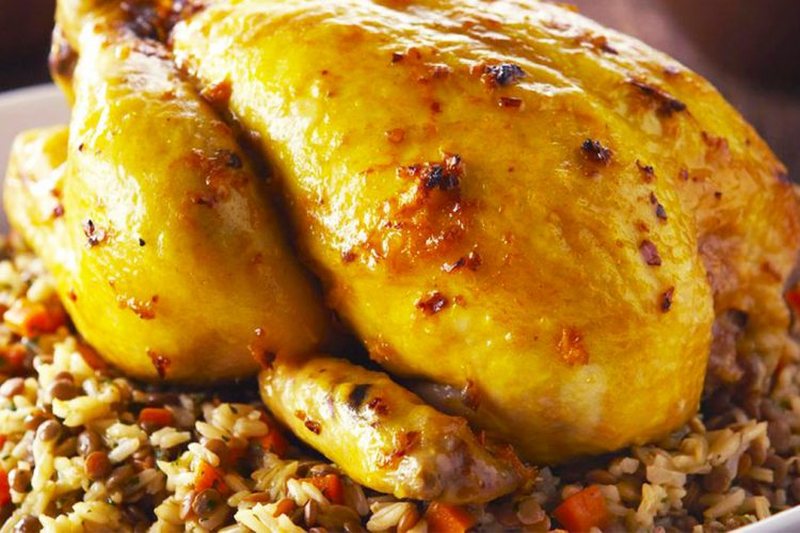 It is called such because it was cooked especially for Ali Pasha, the well-known ruler of southern Albania, a rebel against the rule of the Ottoman Gate.

Recipe for Ali Pasha Chicken, a cooking that has become a tradition of Albanian mahogany. Famous for foreigners visiting Albania, especially restaurants with traditional cuisine.

A delicious recipe, prepared with the best of cuisine, combining white chicken meat with a perfect filling from chestnuts to raisins.

AgroWeb.org suggests below the typical recipe as of the tradition of stuffed chicken Ali Pasha.

(Ingredients below are for 4-5 people)

A handful of almonds

Take a medium chicken, fat and young. The chicken is cleaned, washed and stuffed.

Large chestnuts are selected, set to simmer for 5 minutes. Peel a squash, grate it and squeeze the juice.

Peel a squash, grate it and chop it finely.

Also raisins without seeds and placed in lukewarm water to soften and swell.

In a saucepan with butter, sauté the onions, toss the minced chicken livers and rice and then sauté together.

Add the chestnuts, raisins, almonds, a little salt and chicken broth or water.

The mass is left to boil, until it has absorbed the liquid and has become a crumbly and unfinished pilaf.

When we remove it from the fire, we throw ground cinnamon. This mass fills the belly and gills of the chicken, which are then sewn so that the prepared mass does not come out.

The chicken is smeared with butter, salt, pepper and baked in the oven.

After baking, the cooking is served on plates, putting the core and parts of the filling and sprinkled with the liquid left over from baking./AgroWeb.org

We cooked wrong all our lives, 4 steps on how to prepare "real" pasta

You will lick your fingers! This is the secret recipe to make wiped pancakes like Albanian grandmothers, now in winter to enjoy a lot

Healthy and super delicious, this is the lucky soup that should not be missing on your table on New Year's Eve (RECETA)

Completely revitalizes the body, learn how to prepare the most delicious soup you have ever tasted, but also with full value

This is the proper preparation of the baklava service, the secrets and tricks that you should definitely know

When is the right time to throw salt in our dishes? The best chefs give tips that we should all know

We cooked it wrong all our lives, 4 steps on how to prepare "real" pasta

Do you want to cook as a pastry chef, here is the recipe for making sponge cake

Here's the best meatball recipe you can ever eat: Prepare for no more than 20 minutes