University of Arts, artists come together in an activity dedicated to director Drita Agolli 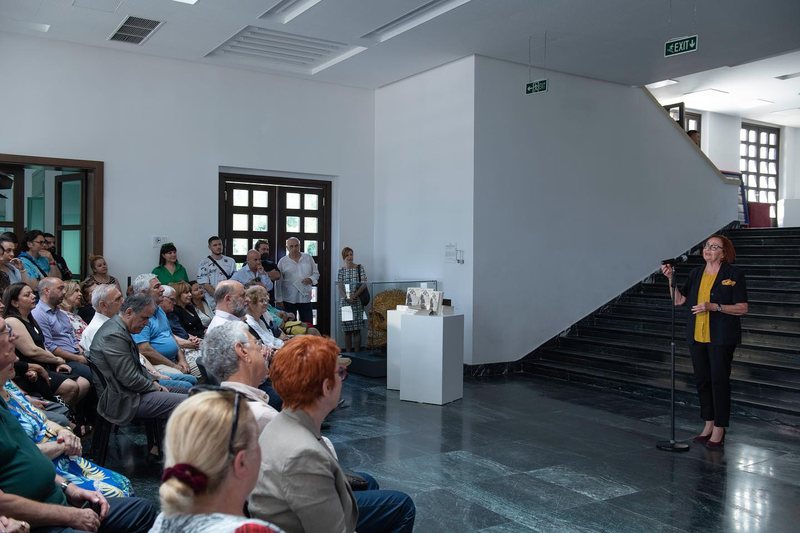 Director Drita Agolli was remembered through an activity at the University of Arts. The Minister of Culture Elva Margariti was present, family members, artists, former students of the director, etc. In this activity was distributed the republishing of the director's book "The Nameless", as well as the scholarship "Drita Agolli", awarded by the family for the best student of directing, where the Minister of Culture said that they will return it in an evaluation every year. Daughter Tamara Agolli expressed her gratitude for the director's appreciation. "You have been close to him and we will always remember this, with gratitude," said the director's daughter. Before attending this event, she said that the director Drita Agolli loved the Albanian woman very much, did extremely much for her and appreciated her. "She said that the Albanian woman is in a lot of trouble and should be helped. "And I believe he has worked with the students just as diligently to give them the opportunity to get on with their lives as best they can," she said. Drita Agolli is the first director to graduate from the University of Arts, but also an artist who nurtured art for generations. Director Mevlan Shanaj, among other things, said that he felt lucky to have had a professor like Drita Agolli. "The most emancipated man I have ever met in my life," said Shanaj. For the Minister of Culture Elva Margariti in the continuation of honoring pioneer women, women artists who break taboos, in a homage ceremony, in the presence of many friends remembered the first graduated director, the honorable Mrs. Drita Agolli. It is a pleasure to be part of this day that the Ministry of Culture supported the republishing of its book "The Nameless". "A book that will serve generations," she said. Drita Agolli (Strazimiri) (born on June 2, 1925 in Maqellarë of Peshkopi, died in 2017) was a well-known Albanian actress, director and pedagogue. As a director, she has acted on the stage of the National Theater and in several stages in other cities of the country: "Storm", "Neon Lamp", "Fiery Earth", "Dead River", "Infidelity", "Louise Miller", etc. As actresses we mention the roles of Mariel "Voice of America", Bianca "Otello", Gertrude "Hamlet", etc.

The Nobel Peace Prize is announced, here's who won the most coveted prize

Agim Janina: In Albania there are books that are sold like old loot, the bells are ringing mournfully

Ledia Sulaj: "Halili and Hajria" ballet on stage for the 50th anniversary of the foundation of the National Ballet of Kosovo, we have a responsibility to inherit the past to the future

"I have no experience", Ismail and Helena Kadare react immediately to the announcement of the 'Nobel' in Literature

The Nobel Prize for Literature is awarded, who is the famous name that won

"Onufri" and Ethnographic Museum in Berat, 41595 visitors from January to September

Alda Bardhyli: Reading and policies in its service continue to remain a challenge