They do not believe their eyes from what they find! Archaeologists are unearthing fossils of the largest terrestrial animal ever known to science 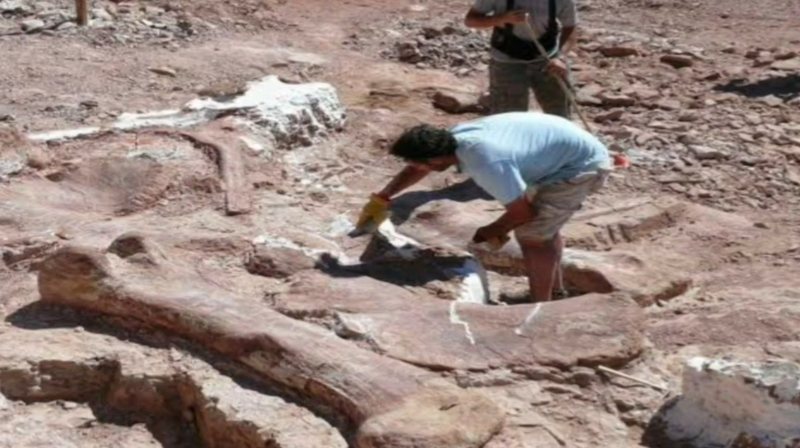 Archaeologists have unearthed fossilized bones in Neuquén Province, southwestern Argentina, belonging to a new species of Titanosaurus, the sauropod family, considered one of the largest animals ever to live on Earth.

The Titanosaurus sauropods were terrestrial herbivores with the largest body on earth that lived during the geological period that lasted about 145 to 66 million years ago. Their fossils have been discovered on all continents, and titanosaur species make up approximately one-third of known sauropods.

The remains found are not a complete skeleton and consist mainly of pelvic bones and vertebrae, and may belong to a previously unknown species.

There are some similarities to fossils belonging to Andesaurus, a type of "giant titanosaur".

Based on the size of the new debris, the authors suggest that this species was much larger.

Also known as the Argentinosaurus, it is one of the largest known land animals of all time, with length estimates ranging from 30 to 40 meters (100 to 130 meters) and weight from 50 to 100 tons.

Based on recovered fossils, new species are likely to exceed a mass of 40 tonnes.

The research was published in the journal Cretaceous Research.

The largest animal that has ever existed on Earth remains the modern blue whale.

Living at sea and not limited by gravity as much as the animals that inhabit the land, it can reach a maximum length of 33.5 meters and weigh 173 tons.

They are dominant and passionate! Meet the 3 most ardent horoscope signs

New opportunities await you / Today's horoscope prediction, discover the surprises that the stars have reserved for your sign

"Secret romantic encounters and sins will not be absent" / Meri Shehu: These are the signs that have great obstacles

Astrologer Mary warns of these two horoscope signs: You will get married

The houses are always light, the women of these 3 horoscope signs are housewives with fame. Where do you find yourself?

Realization of wishes and good news for these horoscope signs! Here is how the stars predict today

"The luckiest and most problematic zodiac couples", the well-known numerologist reveals what awaits these signs in March: They must be careful until the 20th ...

Beware of the words / Horoscope prediction for today, discover the surprises that the stars have reserved for your sign

Good news is coming for this sign! Beware of ... / Learn what today's horoscope predicts for each of you

They do not stop even in the face of the greatest fears, these are the boldest signs of the horoscope